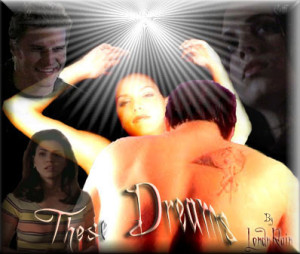 Author: LondnRain
Posted: 02/03
Email
Rating: R
Category: BtVS 3
Content: a bit of C/X, VERY minor B/A, and of course Mainly C/A!!
Summary:
Spoilers:
Disclaimer: The characters in the Angelverse were created by Joss Whedon & David Greenwalt. No infringement is intended, no profit is made.
Distribution: Nothing Fancy, of course…anyplace else, if you want it you got it just let me know where k!
Notes: Chalk it up to watching my Season 2 and Season 3 Buffy DVDs…this takes place pre Lover’s Walk…so C/X are together and B/A are kinda “trying to be together,” unsuccessfully of course!
Thanks/Dedication: I’d like to give a special shoutout to my wonderful beta, Claire!! You rock girl!!
Feedback:

Two rough, yet gentle hands caressed her bare back eliciting hot shivers down her spine and causing her to moan in pure pleasure. His lips were upon hers capturing the moan and savoring it. His strong arms pulling them even closer together, so close she wasn’t sure where she ended and he began.

Everything felt right in that moment, like nothing had in her life. She felt safe, loved. He made her feel like the most beautiful women in the world. Her hand reached out to touch his face, which was hidden in the shadows.

“I want to see you, the man who makes me feel so complete.” She whispered into the darkness. His finger came to her lips.

“Shh, it isn’t time.” His finger was replaced by his lips and his hands started a journey to touch every inch of her body.

The whole world seemed to disappear in that instant, it was just them, the way it was meant to be. She didn’t know his face, but he seemed familiar somehow.

His hands were magic, knowing just the right spots to make her feel like she was going to explode from sheer pleasure. She could feel it building inside of her, she was close. He was on top of her now and she held her breath in anticipation.

Cordelia grumbled as she hit the snooze button on her alarm clock.

“Damn thing, you couldn’t have waited just a bit longer?”

She rolled out of bed and sat down at her vanity. She looked at her flushed face and sweat soaked hair. “That was one hell of a dream.” She smiled as she could still almost feel his breath on her skin and the feel of his hands on her.

Cordelia Chase walked down the halls of Sunnydale High, the halls that she used to own. Where she used to rule with an iron glare, where she could have her pick of any guy in the school. So why did she gave all that up for Xander Harris?

“Hey, Cordy.” Xander came up behind her, putting an arm around her shoulder as he broke her out of her thoughts. She forced a smile up at him. “So we still on for tonight?”

“Yeah, you, me, dark room filled with other groping teenagers otherwise known as a movie.”

“Ok, you seem a million miles away.”

“Sorry, just thinking.” If he only knew what about, she thought to herself.

“Uh oh, that’s never a good thing.” She cast him a death glare and shrugged off his arm.

“God, never mind.” She huffed and walked off dismissing him with a wave of her hand.

“But we’re still on for tonight right?” He yelled after her.

The day just seemed to drag on endlessly, everything the same as the days previous. Even demon research was getting, blah. All Cordelia wanted to do was slip into her bed and back into the arms of the man who made everything exciting and new.

Now, in the cafeteria, at the usual Scooby table, she sat pushing around the slop that passed for food at Sunnydale High. She half listened to the Slayer’s latest tale of heroic battle, which always somehow ended up turning into a big Angel gush.

Cordelia tended to tune out those parts of the conversation. She didn’t really care what kind of new hair gel he was using or how Buffy was trying to convince herself they were “just friends” when she obviously was still lusting over the guy hard.

Cordelia wished the big will they or won’t they question would be settled once and for all so they could all get on with their lives. The tragic love story of the slayer and vampire with a soul was worse than a soap opera. She just couldn’t take it anymore.

“You know guys, this conversation is riveting, really it is, but ya know I think I’m gonna go. I’m not feeling too well, I think this school is trying to poison me with it’s so called food.” At that Xander reached over and took a bite of the food on Cordelia’s tray.

“It would.” She rolled her eyes at Xander and walked out of the Cafeteria. Xander stared as his girlfriend walked away than shrugged and took another bite of the food on the abandoned tray.

“I still say it tastes fine” He said as he scooted the tray closer to him.

Cordelia drove down the lonely streets of Sunnydale blasting the music on her radio. She needed to keep her mind off of things. Ever since her dreams started she hadn’t felt the same about anything. The dreams were invading her mind during the day and wouldn’t let her go.

“Come on Cordy, they are just dreams, it’s not like they mean anything. It’s not like this guy really exists, at least not for you. Maybe they are just dreams of how you’d want Xander to be? Maybe that’s why the guy seems so familiar? Ok I gotta stop thinking about this, obsessing is so not what I need right now, especially over some unattainable fantasy mystery guy. So why do I just wanna go home and go to sleep?” She let out a heavy sigh.

She had drove for hours and nothing had helped to distract her. It was starting to get dark; she glanced at the clock on the radio. 6:35.

“Oh Shit, Xander, the movies.” No sooner than that thought came to her, her cell phone rang.

“So, I was just wondering…”

“If we are still on for the movies?”

“Actually about the movie, i was wondering if maybe you wouldn’t mind Bronzing it instead? I hear the movie is really overrated anyway.”

“And maybe we should meet there, say around 8ish.”

“Yeah, see ya then.” She threw down her cell phone on the seat next to her. Hanging out at the Bronze meant that she’d be with the whole Scooby Gang.

She had to wonder whether they would notice or care if she didn’t show up at all. Sure she hung out with them a bit and even was research and stinky herbs girl, but did she actually matter to them? She was beginning to realize how “invisable invisible Marci” felt.

Cordelia was starting to lose her entire identity, she didn’t even know who she was anymore.

Barely, her only redeeming quality to the “in crowd” was that she was a cheerleader. Her old friends didn’t even acknowledge her since she started dating Xander.

Maybe, though he doesn’t seem as interested in her as he used to be and she knew that if Buffy ever showed the slightest bit of interest he’d drop her in a 2 seconds flat, probably even quicker. The only thing worse than dating a loser reject, was getting dumped by a loser reject.

Well, when they needed a car or she was bored, but invitations to Scooby meetings seemed forced. She knew the only reason they tolerated her now was because she was dating Xander.

So who was she?

“I’m Cordelia Chase and I’m…I’m …alone. Why can’t I have the fairy tale that I deserve? A man that can sweep me off my feet and make me feel whole. Yeah right, in my dreams…literally.” She gave a wry chuckle at her reverie and drove herself home to change for The Bronze.

Cordelia took a deep breath and put on her most confident smile as she walked into The Bronze. She wanted all eyes on her, and her outfit, a short black miniskirt with a red tight top, showed it.

She strolled through the crowd with ease and loved the attention guys were giving her.

“Hey who knows, maybe one of them is my dream guy.” she thought to herself, just as she bumped into someone. She had to catch her breath as she saw the figure cloaked in darkness and shadows. She instantly flashed to the dream.

She looked up to see who this guy was and had to take a step back.

“Cordelia, are you ok, you look pale.”

No this couldn’t be…this wasn’t right.