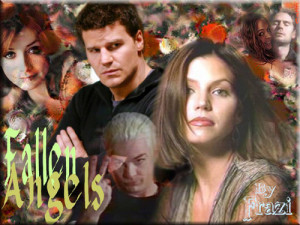 Author: Frazi
Posted: 01-2003
Rating: NC17
Email
Category:
Content: C/A
Summary: When Cordy can’t get Angel to tell her about her lost memory, she finds someone that can help on her doorstep.
Spoilers: Season 3.
Disclaimer: The characters in the Angelverse were created by Joss Whedon & David Greenwalt. No infringement is intended, no profit is made.
Distribution: GTCA & Just Fic is fine with me anywhere else just ask.
Notes: Okay I have a really bad case of writers block and its worse than being bloody constipated. I don’t think this is one of my best fics but I just needed to get something out before I went completely insane! Don’t hate me if this sucks! Please and if it does be gentle. Thanks.
Thanks/Dedication:
Feedback: Pweeeze?

The blonde girl looked and frowned at the unnaturally loud voice of her usually timid friend. She put the shirt she was folding on her bed, and went to pull her bedroom door open when it slapped back on its hinges and I stood there.

“No! Mickey mouse! Buffy what did you do!”

The girl frowned. “What did I do when?”

Instantly the blonde’s face darkened and she turned away. “Leave it Willow.”

The slayer looked up startled then her gaze became cold. “Let the coward leave.”

“Coward! Buffy, this is the same Spike we’re talking about that has been there fighting alongside us for quite some time now!”

“Yeah. For his own personal gain. When he didn’t get things his way, he left. Simple.”

“Buffy.” I calmed slightly, trying to contain the panic that was welling up in my belly. “Spike may be opportunistic, but he was not a coward. I mean look at all the times he’s helped you.”

“For his own reasons.”

“He’s gone! Did you for once think that maybe he did love you!”

The blonde looked up angrily. “That was never love! It was sordid and it was disgusting!”

I sighed. I should have expected this reaction. This was another thorn in our little rose garden. With Xander’s wedding being called off. Tara dying.

My dark period and Spike’s ‘ensoulment’, we just didn’t seem to catch a break. “That’s not true.”

“Isn’t it? It was meant to be that way. It was meant to tell me things that I didn’t know before. I’m not like that. I can’t do what he wants me to do. I can’t be his dark little slayer okay. It was never love. It was just lust and it ended when I realized we were just using each other.

I may hunt in the night Willow but I don’t live in it and I can’t help be disgusted. My instinct was right. I’m a slayer. I don’t belong with a vampire.”

“No. This is proof enough. With or without a soul, Willow. Spike is a vampire and I am a slayer. Nothing he and I do or say will change that.” Buffy picked up her folded blouse and walked to her cupboard.

“I’ve thought this over Willow. It wasn’t easy, but he’s not the one for me. We don’t belong together. We can’t.”

“You may have been lovers Buffy, but you were also allies.”

“Yes. Reluctant ones.” The young slayer sighed. “And he chose to leave.”

I couldn’t meet her eyes. “He didn’t even say goodbye.”

Buffy wrapped her arms around me. “Don’t get attached Willow. He wasn’t much for pleasantries.”

“But you worked so well…”

“Worked. When we went beyond that Willow the friendship got left behind.” The slayer pulled away and smiled ironically. “If there ever was a friendship.”

I nodded. “Yes there was. He joked with me. He bickered with Xander. He even teased and tormented Giles. I mean in a good way Buffy. He did it in a good way and he cared about Dawn…”

“And he sucked face with Anya.” Buffy let out a lung full of air. “Just goes to show his people skills were good.”

“He got a SOUL for you!” I stared at her. “How can that mean so little to you Buffy!”

The slayer sighed and looked at the panic in my green eyes. “Doesn’t that sound like something new?”

I frowned at the cynical rhetorical question. “Buffy, you can’t be this callous…I mean…”

“Hello! Vampire Slayer here Willow. I was always ill at ease with him.”

“But you trusted him.”

“With my life.” She looked into my eyes. “Not anyone else’s. Not yours and not anyone else from the Scooby gang and when you take me, you take the rest of us. My man will have to understand that. Spike never could. I didn’t want to be his dark princess.”

I bit my lip and looked doubtful. “I hope you’re right Buffy.”

At the catch her in voice, I raised my eyes and saw her sit down on her bed. With a sigh I sat down next to her taking her hand in both of mine. She shook slightly. “Why not Buffy?”

“Because we all have to grow up sometime Willow. I can’t go on a destructive streak and come out in the shelter of my mother anymore. I have to grow up to a responsibility of Dawn. I have to keep this sane and simple for her Willow.”

She raised her misty blue eyes to mine, her chin quivering. “I can’t fall for a vampire and forget what I am. I can’t be more than what I am.”

I never understood why vampires and slayers couldn’t just make peace. Wrapping my arms around the savior I held my friend as she held me.

But I knew why two vampires had tortured souls because of this slayer.

Hmph. It was a conspiracy. They just didn’t make men like Hugh Jackman in real life. At least not like he was onscreen.

I sat on my couch a bowl of popcorn in my lap and the remote, while Ashley Judd jumped around like a cheerleader in front of a yummy naked Hugh Jackman.

I should have been happy to be myself, but I knew that it wouldn’t be long before I’d need to call a certain vampire, or he’d show up at my doorstep with his concerned brown eyes.

It wasn’t half bad at the hotel but with the arrival of one very messed up slayer named Faith, who I couldn’t seem to like for some reason, it was starting to get a little tedious.

Angel walked around on eggshells while I was there, like he wanted to tell me something. Wesley walked on eggshells around Angel because he’d supposedly ruined his little baby; a baby that hadn’t stopped making eyes at me and frankly, I was starting to worry the boy needed a lesson in family values.

And of course Fred and Gun just didn’t seem to walk on anything while they were together. As if not remembering who and what you were wasn’t enough.

Yes. I decided I liked the solitude. The green skinned demon singing was a pleasant distraction but with Faith’s lovely mouth and all the insight into my previous life as Queen C in happy instances of the letter ‘F’, proved that I’d go crazy if I stayed there any longer.

True; by the end of the next four hours I would be back at the hotel.

I sighed. It was hard trying to put life stories to pictures and names to face, but I’d been making progress. Now I wondered if I was remembering things or just recalling what I’d memorized.

Every now and then I had to call Angel and get my stories straight. Maybe he was right. Maybe I should shift into a spare room at the hotel. I’d save money in phone bills.

It seemed like Dennis was the only one who seemed to understand my need for solitude. Besides, with him around it wasn’t much of solitude. Maybe I could ask Wesley to come up with a spell to shift Dennis into the Hyperion.

It must get boring for him with me away for so long. That way Angel wouldn’t bother me so much about being unprotected and I could lock myself in the room if Angel bothered me too much.

As if. I scoffed.

When a glass of cherry juice floated over to me I smiled. “Thanks Dennis.” I was about to raise the glass to my lips when the insistent pounding started.

I yelped, the glass flying out of my hand, but the ghost caught it just in time as I stared at my front door being beaten down.

When it didn’t stop I jumped to my feet anger bubbling inside me. Angel was going to get it. “ALRIGHT ALREADY! I’m coming! Stop trying to wake the dead.” I blinked. “Oh. Sorry Dennis.”

Walking to the door I unlocked while the knocking still continued. With a grunt I heaved the door open and stared. “Oh my god!”

A very drunk platinum blonde vampire stood leaning against the doorway a bottle of Jack Daniel’s in his hand and liquid blue eyes looking pained. “Cheerleader. There something I want you to do.”

I watched him for a while before speaking. “What?” I knew this one. He was different though. The sketch had caught him in brown pastels.

My eyebrows shot up. “What?” What had it been? Spark? Spook?

“Well I can’t. Not with the bloody chip in my head. Then there’s the soul trouble. So how about it love? Help a poor bloke mend a broken heart?” His big blue eyes pleaded silently with mine for a second.

I felt the urge to smile, but that would have only made the drunken vampire feel worse, so I stayed silent. It was strange. A part of me seemed to identify with him. I didn’t know why.

“No, I’m bloody talking about Cinderfuckingella! Of course Buffy! Isn’t that what they bloody call this sitcom?”

I chuckled slightly. “No this one is called Angel.” What was with all of Buffy’s vampire rejects? Why did I end up playing nursemaid to them?

He seemed to ponder that. “Is that better?”

I couldn’t help it. I burst out laughing. “So far.”

The vampire nodded and stood as steady as he could. “Invite me in cheerleader, before I pass out.”

“The name is Cordelia.” I sighed. A quiet day I’d thought. I knew about his recently souled state, but I didn’t really know him. I bit my lip.

I was supposedly half demon and I was in need of answers. Having Angel around leaning in my personal space and trying to wrap those strong arms around me every chance he got wasn’t helping me settle the storm of voices in my head.

Running away from Angel’s little family…my family…hadn’t really worked. I’d had to go back when I had a vision. Then I had to stay until Angel got back just to make sure he was okay.

Occasionally I’d stay back longer to patch him up, but since Faith had returned, he’d had backup and I would be gone before Angel got back.

Any excuse for avoiding the implications in his eyes every time he looked at me.

I looked up startled at soft whisper of my name and met blue eyes. His forehead was leaning against the invisible barrier separating us.

The pain was evident in his eyes and etched across his face in ageless tangents. I took a deeper breath.

He grinned widely then his eyes rolled back into his head and he collapsed at my doorstep.

Great. I groaned. I never got a break did I? “Dennis. A little help please?”