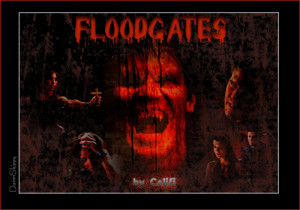 Author: Califi
Posted: um… 2003-ish?
Email
Rating: R/N-17
Category: Angst- VERY dark. Attempted rape scene.
Content: C/A… sort of.
Summary: What if it had been Cordy’s blood that had been used to spike Angel’s supply?
Spoilers: This is an AU on Sleeptight.No Connor/Groo return/Demonizing
Disclaimer: The characters in the Angelverse were created by Joss Whedon & David Greenwalt. No infringement is intended, no profit is made.
Distribution: just ask
Notes: My first ever completed Serial- YAY!
Notes 2: (06/07/2018): This is one of the fics that I decided, at the time, not to add to my then-updated Site. An early fic when I still had a lot to learn, so it is pretty rocky in my opinion. I have a habit of reworking old fics when the urge flares, so hopefully it will be posted fully soon.
Thanks/Dedication: ficpic by the lovely DamnSkippy. Thanks Debs. NMwah!
Feedback: Always appreciated by my Muse.

“Don’t you ever stop with the whining? God knows why I put up with you!”

After the abrupt outburst, Angel turned on his heel and stormed into the kitchen, leaving three stunned colleagues standing in the lobby staring wide-eyed after him.

“What the hell was that?” Cordy Asked shakily, unable to stop the hurt coloring her voice.

For several weeks now, the vampire had been acting weirdly around her. From either invading her personal bubble to being generally irritated by everything she said or did. She’d become aware of his irritation early: cutting her off mid-sentence; interrupting or walking off as if he hadn’t even been listening to her in the first place.

But this was the first time he’d been outright nasty and confrontational. What was his problem? Jerk!

Wes absently removed his glasses and fiddled with them as he watched Cordelia jerkily turn away, then attack the file the vampire had tossed on her desk. They’d all noticed the gradually building atmosphere that hung around the hotel like a darkening cloud recently, but had put it down to too many cases and not enough down time to recover spent energy.

More often than not Cordelia had a way of getting under your skin. In a pretty abrasive way. Neverending chatter interspersed with sharp tactless comments. Over time you did get used to it. And it was patently clear to those who took the time to get to know the real Cordelia, that malice was never part of the equation. Complaining was a thing she was also quite adept at. But again, as with every other quirk of the fiery girl’s nature, a pinch of salt was always required.

The Angel-Cordelia familial closeness was at first a little perplexing to the young Watcher when he’d arrived on the scene.  But it hadn’t taken long for him to accept their unusual relationship. Akin to a protective, often mildly irritated older brother to a sometimes exasperating little sister. Which was why the vampire’s over-reaction surprised and concerned him.

Normally he would have left them to it.

But this confrontation, to his presently confuddled mind, seemed far from ‘normal’. With slight reluctance, he followed at a much slower pace, pausing in the doorway to watch in silence as Angel shoved the mug he held into the microwave; the small door slamming so hard that the appliance shuddered on the worktop.

Letting out a sigh, Wes straightened up from the doorjamb and took a couple of steps forward.”That was uncalled for, Angel.” Although quietly spoken, censure was heavily marked in his tone.

Angel roughly rubbed the back of his neck before turning round to lean back against the counter. “I’m sorry, okay? I just…” Long fingers drummed restlessly on the laminate top, his features taut and darkened eyes reflecting the tension that could be seen in every line of his powerful frame. He glanced up, then quickly away from the concerned blue gaze. “It’s been a long day.”

“More like an avalanche of long days, and tempers may be a little frayed, but that’s no excuse…” Wes paused as the microwave pinged abruptly.  Angel took advantage of the slight reprieve by busying himself with task of opening the door and grabbing the steaming mug.

“You’ve really hurt Cordelia’s feelings.” The vampire hesitated at the quietly spoken words, then took a tentative sip of the blood before tilting the mug higher and gulping it down.

His rigid posture visibly relaxed as he drained the contents, and when he finally turned to face Wesley, a faint, repentant smile graced his lips. “I know, Wes- and I am sorry. I took my bad mood out on her. It won’t happen again,” he promised.

“I don’t mean to be blunt, Angel, but Cordelia seems to be the only recipient of your, err, bad moods of late.”

Placing the mug on the worktop, the vampire closed the gap between them. “Really?” he asked, looking puzzled. “I didn’t realise. No wonder she’s being so difficult.” At the abruptly raised brows, Angel seemed to check himself, shaking his head with a rueful smile. “You’re right. There’s no excuse. I’ll go and apologize. ” Patting the younger man’s shoulder briefly as he passed.

With a deep sigh, Wes followed; a feeling of missing something but not being able to put his finger on it. Then he shrugged. As he’d said himself, they were all running on empty. A perfect scenario in which to see things that just weren’t there…

Standing less than a foot away from Cordelia’s desk, Angel was at first willing to wait patiently for her to acknowledge him. But there was only so long before his earlier frustration reared its ugly head. Judging by her tense shoulders and the deliberately averted face, he knew it wasn’t going to happen anytime soon. She wanted him to sweat.

Bitch! Letting out a harsh breath he closed the gap, leaning in and rested his hands flat on her desk until his face was level with hers .

“Look, I’m sorry I yelled at you…” Cordelia’s full mouth tightened. Yeah, right! she swallowed hard then lifted her disbelieving eyes to his.

“No you’re not.” Fine brows arched high at his instant scowl. “Wes told you to apologise. Don’t think I didn’t see him scuttle after you.” Rolling her eyes at  the ” I didn’t scuttle” coming from said scuttler,  she leaned back to gain a little space from the hovering Vampire, trying not to show just how much it rattled her.

“You shouldn’t have had to tell him to, Wes,” staring back and determined not to blink as the storm clouds gathered in Angel’s eyes. “It doesn’t count when you don’t mean it”, she added sourly, determined not to make it easy for the big, fat grr guy! He’d been grunting monosyllables at her for hours before getting all-out mean, and in her book, he deserved a little payback.

His fingers, which had absently lifted a pencil a moment earlier, tightened around it until the wood cracked. A tiny splinter pricked his palm, but he didn’t ease up the pressure, keeping a tight hold of the pieces.

“I meant it!” he snapped. Her spine instantly stiffened at his tone. No way was he in any way feeling repentant, she thought angrily. It was simply a front designed to con the others and…keep the peace in the workplace.

At that stray thought, Cordelia tore her gaze from his and glanced around surreptitiously, taking mental notes of the badly disguised hopefulness on the faces of the others. Fred, who’d almost jumped out of her skin in shock earlier, now buzzed with ever growing anxiety.  The first shimmer of guilt blossomed. As much as she wanted to throw the faux ‘apology’ back in his face,  it wasn’t fair on the others to drag it out any longer.

Shoulders slumping in – temporary, defeat she reluctantly nodded and waved her hands. “Fine. You’re forgiven,” spoken a little too brightly, adding “Don’t do it again, or I might just quit.” then laughed it off as a joke. Darkened brown eyes stared back, strangely intense and unsettling. Was he even listening? she wondered, fidgeting with discomfort as his gaze roamed her face and upper body.

Her hesitant voice broke the haze that had formed as he’d felt her response to his words; watched as she discreetly surveyed the others. All the time her scent crept up until it and engulfed him, twirling seductively into his nostrils.

He had no difficulty separating the blend of aromas that oozed from her so deliciously. Rose bath oil, Spring flower shampoo; a subtle layer of cinnamon that was distinct no matter what bath products she used. And blood. rich, intoxicating blood. the taste of her life-essence coated his tongue and clung to the back of his throat like a lover’s caress.

His body tightened with need. The urge to pull her up, throw her across the desk and taste her was so strong that he had to force himself to straighten up and slide clenching hands into his pant’s pockets. Backing away completely was an impossibility; nothing could have moved him right at that moment. the repeated sound of his name pierced through the fog of his thoughts, and he shook his head almost imperceptibly, attempting to clear it.

Consciously relaxing his stance, Angel caught the discomfort in her gaze. “It’s been a busy and tiring couple of weeks.” He began hesitantly, managing to soften his features into the patented puppy dog expression.”I shouldn’t have taken it out on you.” He paused and chewed his bottom lip, his eyes showing nothing but guilt. “Will you forgive an old guy for getting grumpy?”

Cordy stared up at him for a long moment, searching his softened gaze and features. Finding no hint of what had unnerved her seconds earlier, she relaxed a smidgeon. It was true. Although having a healthy bank balance was more than welcome, things had been hell on earth the past few weeks. It wasn’t that surprising that tempers were frayed.

As he stood there, seemingly anxious for a response, anger and hurt lessened and a more natural smile curved her mouth. Although tempted to pat the hand nearest to her to show no hard feelings, she couldn’t quite bring herself to do it.

It was odd that she was the target of his ‘grumpiness’. Which was an understatement when she thought about it. But then again, maybe that was because they had much more history than the others. You hurt those you care about most.

“Okay, ‘grumpy’. I’ll let you off.” she finally replied, relenting a little more by adding: “I’ll try to keep a zip on it too.” When Angel returned her smile, the corners of his eyes crinkling cutely, another, warmer smile graced her lips. Picking up the discarded file, she glanced up enquiringly as Angel still hovered, “Did you want to talk about anything else?”

“No, no…that’s it! I’ll just…” Angel pointed to a spot behind him then backed away before turning to head towards the stairs. As soon as he reached his room, he relaxed his tight grip on the pencil and abruptly tossed the broken pieces into the wastebin, frowning darkly as he belatedly recalled something she’d said earlier …