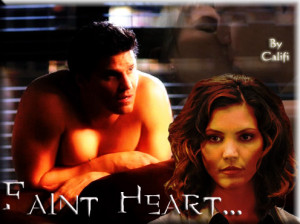 Author: Califi
Posted:
Email
Rating: R/N-17
Category: Angst. [what else?!]
Content: C/A
Summary: W & H are up to tricks, as usual, and one of their plans come to fruition when Cordy wakes up at an inopportune time for Angel…
Spoilers: From S5, Life’s a Party. *cringe* I am not watching S5, so if there are discrepancies, sorry about that. This is MY AU.
Disclaimer: The characters in the Angelverse were created by Joss Whedon & David Greenwalt. No infringement is intended, no profit is made.
Distribution:
Notes: One of the early scenes takes place in the same area as Lily & co have already done so; just wanna say, forgive me Lily, didn’t realise – but the similarity stops there.
Thanks/Dedication:
Feedback:Would be nice

“I am better than thou art now; I am a Fool – thou art nothing.”
Cordelia [of] King Lear.

Angel grunted heavily as he came; his eyes screwed tight and his large hands clutching narrow, naked shoulders that trembled softly. Then the realization of what they’d done came flooding in with unpleasant clarity. Oh, God!

Maybe if he kept his eyes closed a little longer, he’d find it was just a bad dream – or so he hoped; but the pained gasp that would have been inaudible to anyone but him hit his sluggish mind and put paid to that desperate wish. When a familiar aroma also assailed his senses, Angel’s world came crashing around his ears.

Opening his eyes reluctantly, Angel’s head snapped towards the source of the husked, familiar sound, praying his fears were unfounded. Shocked wet hazel eyes looked back at him.

And his heart lurched to his throat with sickening force. Pulling away from the body in front of him, he hesitated, suddenly aware of his nudity. Yet another nail in his self-made coffin.

“Cordy-” Her beautiful eyes dropped lower, mouth twisting in repellence as she couldn’t help but notice the painfully obvious action of the withdrawal of his sex from the equally silent blonde, who’s face was flushed; her expression a mixture of hazy pleasure and amusement as she surveyed the terry-robed brunette who stood swaying in the open doorway with a raised brow.

Both Vampire and Seer were frozen to the spot -then with a muffled sob; the girl spun on her heel and ran.

By the time Angel had pulled on his pants and ran into the corridor there was no sign of his Cordy- how the hell had she moved so fast? He wondered frantically; snarling aloud in frustration and panic, which instantly turned to rage when a small warm hand hooked around his elbow.

“Can it, Eve!” the wet sheen in her big eyes was belied by the smugness, but he was too preoccupied to notice it, only the fact that she hadn’t even bothered to cover herself – and that made his gut twist with guilt even more.

Pulling roughly away, Angel lifted his reeling head to scent the air for the familiar aroma of cinnamon and apples, which soon touched the back of his throat, then he raced down the deserted corridor without looking back.

Eve sighed long and heavy; before grinning with cold satisfaction.

“Wow! They actually pulled it off! – As if I had any doubts.” She murmured as she re-entered Angel’s Office and closed the door quietly behind her.

Angel finally caught up with her just as she entered the dimly lit underground garage.

“Cordy, wait!” he rushed towards her almost running figure and grabbed her upper arm, swinging her around. She shrunk away from his touch like he was a leper and the pain in his undead heart grew at the hurt and disgust on her much loved beautiful face; the only reminder of her comatose condition was the pallor of her once-golden complexion.

“Don’t. Touch. Me!” Cordy shuddered with revulsion, her voice sounding rusty and hoarse, but hearing it after so long filled Angel with a brief surge of joy.

Confident that her flight had halted- for now at least, Angel kept his distance, raising his hands high in mute assurance.

“Wish I wasn’t” she shot back with a touch of the old Cordelia, spoiling the effect by blinking rapidly and turning her face from him.

“H-how; when – why wasn’t I told?” Angel stammered as his head whirled with raging emotions and endless questions. Cordy looked at him again, her expression bewildered.

“I don’t know- not long; does it matter?” before he had a chance to reply, she rambled on feverishly. “No one was around. I waited for a while but no one came. So I went to find someone – why am I here; in this-this…place?” Shock and fear tightened her features. “Why are you here?” she added, her confusion growing by the second.

“A lot has happened since…” Cordy cut him off with a sharply raised hand. Angel noted the fine tremor of it hazily as he pulled his thoughts together.

“I just wanna know – how did I end up here?” At the touch of hysteria lacing her sharp tone, Angel took an instinctive step forward, intending to reassure her; instantly she moved back, eyeing him warily.

“Cordy, please…” he let out a shaky breath and ran a rough hand through his hair. “What’s the last thing you remember?” He asked.

“Why? Is that important?” she asked, then continued, not waiting for his response. “The last thing I remember is being in the glowy version of Boredom City,” flicking her eyes towards the ceiling, “watching you guys- in Vegas.”

Angel reeled. She doesn’t know; doesn’t remember! Although trying not to dwell too much on the past, he’d secretly dreaded this scenario; that she’d awake with no memory of what she’d – Jasmine had done. For her own sake it would have been preferable, but the way things had turned out because of it, Angel knew things would be even harder to explain.

There was also the matter of his son. When it became painfully obvious to Cordy that they were the only ones to know about Connor… He swallowed sickly, the terrible weight of his not so recent decisions and action coming back to bite him where it hurt the most. Where the hell did he begin? More importantly: how much could he get away with leaving out altogether?

On picking up her trembling, lightly clothed body, he evaded the question- for the time being, “Look, it’s cold down here – let’s go back up to my- .” Her eyes widened in horror. “-Somewhere not there; and I’ll tell you everything.” He corrected awkwardly.

The last thing Angel wanted was for them both to be reminded of what had just happened- although judging by her dazed expression, she wouldn’t be forgetting it in a hurry . He still couldn’t believe he’d done it himself! Even if Cordy hadn’t been a factor, he still wouldn’t have chosen Eve.

“I want to go home- or to the hotel.” She broke into his thoughts; her voice now high-pitched and thready. No way in hell was she going back up there she thought, wildly. Of all the places to find herself; the Wolfram & Hart building wasn’t one she’d ever have imagined wanting to wake up in.
As to why she- and Angel were here…and she seriously doubted it was to rescue her from the evil Law Firm; unless boning that skank was an integral part of the plan – anyway, although right now, Cordy doubted she’d ever want to know.

Her head spun crazily. The need to get out of there almost suffocating in its intensity.

“We had to let your apartment go,” Angel admitted hoarsely, “The hotel; well …I don’t think that’s a good idea. I mean, I haven’t lived there for months now. It’s still pretty damaged, too.” He added, distractedly while he thought of an alternative.

“Damaged? Why – what happened to it?” Cordy’s scattered thoughts honed in on something familiar. He jolted, then shifted awkwardly, suddenly feeling vulnerable and unclean as her shell-shocked eyes ran over his naked torso, and lingered on the open top button of his hastily thrown on pants, the hazel irises darkening with revulsion.

“It’s, um- part of what I have to tell you.” Angel stuttered, automatically moving forward when she began to edge even further away. He really didn’t want to have to grab her – but if she took off, he wouldn’t have much choice but to restrain her.

“Who else is here? – Where’s Wes, the others, Angel; and Connor – is he here too?” he flinched noticeably at that last name, and her brow instantly drew into a confused frown- quickly clearing, as fear took over and rushed to the forefront of her mind. “Oh, my God! – Don’t tell me he’s-“

“No! No, Cordy, he’s not – he’s safe.” He hastened to soothe her. “He- he just doesn’t… Connor’s not here.”, his breath shuttering painfully when she moved away from him yet again. His eyes darkened in pain on watching the way Cordy rubbed her fingers harshly over the spot he’d briefly touched her.

”You need to get warm,” Angel said after a long pause and indicated the elevator several feet behind him, but she baulked.

“I said Not here! – These people have a habit of trying to kill me. I don’t feel safe, why do you think I’d be safe here?” she questioned fretfully, her distress growing in leaps and bounds.

Angel could hear her heart racing at an unnaturally fast pace, and that worried him as well as the way her whole body shook. Fuck! He knew if he didn’t do something soon she’d go into shock. That is she if hadn’t already, he thought bitterly, the sour taste of shame and regret hitting the back of his throat.

Looking around blindly, Angel tried desperately to clear his head and think of a way to get her out of the cold, dim garage without making things worse than they already were. He was uncomfortably aware of the hidden cameras placed strategically around the cavernous underground car park, and tensed, prepared for the inevitable security guards, witnessing their confrontation, and interrupting them; which is all he needed right now! His eyes skimmed the row of cars he now owned.

Shoving his hand into the pocket of his pants, Angel was intensely relieved to find that, as hoped, a set of car keys were still there. He vaguely picked up on the irony that the keys were to his old Plymouth -that he now rarely used. The find was a blessing: the more familiarity for Cordy the better, he thought hazily.

Instead of attempting to touch her again, Angel indicated the car and walked over to it, keeping a reasonable gap between them even as he kept eye contact with her, praying she wouldn’t run in the opposite direction. Opening the passenger door first, Angel walked around to the driver’s side and waited.

After hesitating for a few seconds, Cordy finally walked over and, after shooting him a wary look, she climbed quickly into the car. Letting out a small sigh of relief, Angel opened his door and slid into his seat.

Once they driven up the ramp and exited out into the night, Angel’s eyes flicked constantly towards Cordelia. Concern for her wellbeing grew as she huddled against the door, her unnatural silence freaking him out even as he wondered hazily if the hotel still had power…