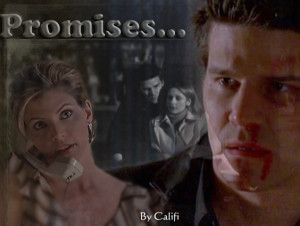 Author: Califi
Posted: 15/04/06
EMAIL
Rating: PG/R–upwards
Category: Angst
Content: read the fics!
Summary: a second promise made voids a first with repercussions. This fic is from Darkness Within. A Beige Angel/Cordelia fanfic forum based at TIO. No longer online.
Spoilers: S2 Epiphany. and some of S5 BtVS (Post The Body).
Disclaimer: Joss Whedon & David Greenwalt created the characters in the Angelverse. No infringement is intended, no profit is made.
Distribution: Anywhere, just tell me where it’s going first.
Notes: Angel went directly to see Buffy from offering his services to the FG after his Epiphany. What if the BtVS chat went differently…? This question always both pissed me off and plagued me, so I decided to write it differently…[warning]won’t be pretty, mind.[/ warning]
Thanks/Dedication: To Cat, who listened as I went through my ideas for this, so far, undefined amount of standalone vignettes- and for agreeing to Beta it (this one is unbetared, btw, as a teaser to see how it takes the interest- or not, lol)
Feedback: Would make writing so many fics all worth while

Entering the lobby of the dark, deserted hotel, Angel absently rubbed the back of his neck. He ached all over- but in a good way for once.

Fighting a vision with Cordy Wes and Gunn after his self-enforced exile had felt like coming home.

Looking around the unkempt lobby Angel realized he had a lot of cleaning to do to make it presentable for the others when they returned tomorrow.

True, Cordy still held herself apart from the others in hesitant welcome, and each time their eyes had met, her mistrust shone brightly. But she kept the peace and that gave him hope. Hope that things would eventually work out.

Angel doubted it was going to be easy. After all, He’d abandoned her- his seer; his friend. And threatened her. He grimaced in shame at the recollection. He could still see the hurt that had glittered in suspiciously moist eyes as he’d done so. Over a damned book, no less.

The unsavory thoughts that had been in his mind at the time still hounded him: the desire for Cordy to continue to deny him the book- and the twisted wish that Wesley hadn’t been around to give her reason to restrain her natural contrariness.

Even now he was unsure as to what he’d have done it that had been the case, but unexpected lust had reared its ugly head at the fire in those beautiful eyes. So maybe it was a good thing the other man was there after all.

”You hurt my feelings..” Angel was just glad it was only her feelings he’d hurt. It could have been so much more…. No. Where Cordelia chase was concerned, it definitely wasn’t going to be easy.

But he had time, and it would be worth it in the end to see that long lost smile on her face- aimed his way instead of the others, anyway. That still rankled more than anything.

With a deep sigh, he made his way towards the maintenance cupboard, shrugging off the unreasonable jealousy over the closeness developed between Cordy and the others, deciding to get a start on the lobby and hopefully clear his head at the same tme..

Pausing as he came level with the counter, he noticed that the message light blinked on the phone. For a moment, Angel considered ignoring it, then remembered the almost fatal repercussions the last time he’d done that. Reaching out a hand for the button, he paused again.

What if Wes had called? What if they’d changed their minds? He swallowed down the lump of fear that formed in his throat at the thought, and then slowly pressed the button. Better to know now. At best it would put the immense cleaning job off for a little longer, he thought wryly.

After listening attentively to the message, Angel’s brow by now deeply furrowed, he finally turned off the machine and took the stairs two at a time. Ten minutes later he descended, overnight bag in one hand and car keys in the other.

“ I didn’t even start CPR until they told me. I fell apart. That’s how good I am at being a grownup.” Buffy muttered with self-condemnation. Angel pulled her closer, hugging her tight.

“Buffy…” he began softly, only to be interrupted.

“And it’d be okay if it was just me I had to worry about. But Dawn…” her bottom lip trembled and Buffy bit down on it.

“Look, it’s okay. I know you don’t feel like it now, but you are strong, Buffy. You’re gonna figure this out. And you have people to help you. You don’t have to do this alone.” he reassured her.

Looking up at the sky, Buffy commented, “It’s gonna be light soon.”

The reminder caused Angel to look up and shift slightly against the tree trunk he leaned against. “I can stay in town as long as you want me.” He offered after a long pause.

“How’s forever? Does forever work for you?” Buffy asked tremulously, turning her head to look up at him, then sighed and sat up straighter. “That’s a bad idea. I’m seriously needy right now.” She added with an apologetic twist of her shiny pink lips.

“ Let me worry about the neediness. I can handle it,” he replied reassuringly, giving her another comforting squeeze.

They looked at each other for a moment and then Buffy suddenly leant in and kissed him. The kiss remained soft and lingered for several seconds before he drew his head back. It had been sweet and pleasant; poignantly reminding him of things past, but the heat they once shared seemed to be missing.

It had been a long night, and not exactly the time for making out sessions, Angel reasoned tiredly.

Buffy rested her head against his chest and let out a soft sigh of contentment. A calm silence surrounded them for a while, and then she spoke. “So…. Did you mean it? – You’ll stay?” she tensed in readiness for his reply, feeling his big body tighten too. Her lips pressed together as she waited for him to reel off all the reasons it was a bad idea.

“I meant it, yes.” Angel finally replied, adding, “If that’s what you want?” Her nod and the tightening of her arms around his waist caused him to swallow hard as it hit him exactly what he’d just committed himself to, and as she snuggled closer to him, Angel closed his eyes and silently sent out a prayer for forgiveness to his friends in LA.

“Wes?” Cordy blinked sleepily up at her early morning visitor with a mix of surprise, concern and irritation. “You do realize it’s only…” she glanced at her watch only to find a bare wrist.

Oh. That was right. Wes had got her up out of her nice cosy bed at… “6.30 in the morning?” she added belatedly after grabbing his hand and checking the watch on his wrist.

Her eyes widened with the first stirrings of alarm “is everything okay?” she asked anxiously, instinctively pulling him inside her apartment.

“We- myself and Gunn are fine, “ Wes quickly reassured her, gently pulling from her tight grip and turned to close the front door. He paused a moment, forehead against the wood. The news he had the misfortune to relay ate into him. He couldn’t put it off any longer.

On turning back to face Cordy he was glad to at least see the anxiety brewing moments before on her sleep-flushed face had faded, now obviously purely curious as to what brought him here at such an ungodly hour.

Even as she relaxed, Wes tensed as he prepared to drop the latest bombshell. “Cordelia…” Wes rubbed a weary hand over his face before catching her questioning gaze. Cautiously he continued. “It’s about Angel-.”

“Something’s happened- what’s happened?” Cordy, already a little antsy, not to mention irked at being dragged out of her bed only several hours after crawling into it was immediately struck by the growing gravity in the lines of Wes’ face.

Everything told her it wasn’t going to be good news. “He- he hasn’t been staked, has he?” the last word came out on a quaver as the possibility popped into her head.

Angel had dropped them all off at her Apartment after the fight, and who knows what could have happened on the way back to that neglected hotel. He’d made even more enemies since his turn to the Beige; especially with Wolfram & Hart.
Her heart hammered so hard in her chest; Cordy pressed a hand against it as she waited for a response.

“No! Nothing like that. He’s…fine,” Wes hastened to reassure her, not that surprised by Cordelia’s emotional reaction to the thought. Thing may have been truly dreadful the past several months, but there was no doubting that although she was indeed furious and deeply hurt by Angel’s actions, her feelings, developed over the years had merely been pushed to one side; not erased completely.

“He called me about an hour ago. Unfortunately, there has been a change of, um, plans.” Wes watched as her initial curiosity changed to wariness. Realizing he was still keeping her waiting- mainly due to the poke she gave his shoulder and the frown creasing her brow, Wes continued in a deliberately upbeat tone.

“It looks like it’s just you, Gunn and me again, Cordelia,” Wes blinked and looked away for a moment on seeing the confusion growing in her eyes at his declaration and dove right into the reason for his being there.

“Angel informed me that he was in Sunnydale.” He watched as the color drained out of her face.

“He’s with Buffy?” Cordy’s question sounded more like a statement of fact, but Wes nodded anyway.

“Apparently a lot has occurred there recently, and, well,” Wes scuffed the tip of his shoe into the mat he was standing on as he attempted to explain Angel’s change of heart. “From what he tells me, Buffy needs him with her.”

“He- he’s staying there? For good?” when Wes cleared his throat and shuffled awkwardly on the spot Cordy added tightly. “He’s not coming back, right?”

“It doesn’t seem that way.” Wes finally managed to articulate. All the air seemed to whoosh from her body at his confirmation.

He mutely watched as Cordy rubbed her hands over her face, fingers pressing against trembling lips, he noted poignantly, before dropping her arms and looking up at him with frighteningly blank eyes.

“Well, it’s a good job we didn’t give up our office space then, isn’t it?” she threw him a blinding smile, “Since you’re here, I might as well put the kettle on. Tea?” she asked with forced brightness and turned away to stride purposely towards the kitchen.

Wes made his way to one of the easy chairs in her lounge and almost collapsed into it as he listened to Cordy potter away in her kitchen; the sounds for once not that soothing as he heard the opening and closing of cupboard doors and water pouring into the kettle.

So much for new beginnings. His lips twisted into a mirthless smile. Strangely enough, Wes wasn’t as surprised as he thought he’d be that Angel had once again let them down. He glanced over to the kitchen door. But Cordelia…

At that moment, Wes doubted he could ever forgive the vampire with the supposed soul for breaking Cordelia just that little bit more.

“Good riddance,” he muttered under his breath, reminding himself that he still had to contact Gunn. Another one of the group he doubted would be surprised either.