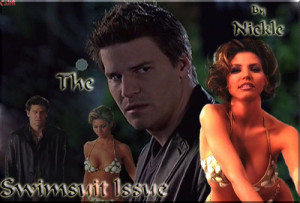 Author: Nickle
Posted:
Rating: N-17
Email
Category: Humorous smut
Content: C/A
Summary: It was a teeny weeny itsy bitsy yellow polka dot bikini…and Angel can’t take it.
Spoilers: AU from the beginning of Belonging on.
Disclaimer: The characters in the Angelverse were created by Joss Whedon & David Greenwalt. No infringement is intended, no profit is made.
Distribution:
Notes: Based on a challenge by Sach [Califi]
Thanks/Dedication:
Feedback: would be delightful.

Wesley and Angel clambered up the stairs from the basement, grimy and tired. Angel held a cloth to his head, over a shallow gash that had long stopped bleeding.

Opening the door, they walked into the lobby, stopping short at the sight of Cordelia sitting in a miserable huddle on the seat in the middle of the room. Angel looked at Wesley then back at Cordy.

Angel looked at her a moment, seeing her in his mind in that swimsuit. That really little swimsuit. The one that….he shook himself mentally. “Hi.”

Cordy looked up at them and glared at Angel momentarily before looking back down at the floor, silent. Angel shifted uncomfortably.

How was it that he could stand up to Haklar demons, the worst firepit in hell, even 80 year old power walkers with only minor scrapes to mark the meeting; but faced with an angry Cordelia, he was a towering rock of jello. He stepped closer to her, uncertainly.

“If you were out of line?” Cordelia’s voice rang out incredulously. She looked up at him, her eyes narrowed. “If? You’re pretty comfortable with the use of the word ‘if’ here, aren’t you?” She rose and stalked past him, wandering aimlessly across the room, as if walking was the only thing she could do to keep from slapping him.

Angel watched her, torn between groveling and simply grabbing her by the hair and hauling her back to his cave to put her in her place. And that place would be…..

“I ended up getting fired, thank you. Freakin’ fired.” Angel flinched at her harsh tone. “My first shot at national exposure, and it was blown by a Vampire with the social skills of Charles Manson.” Angel opened his mouth to speak and Cordelia shot him a venomous glare. “Shut up.”

“I didn’t say anything.”

“You were gonna. You were gonna say how…..oh….gee, Cordelia, they shouldn’t treat you that way, or gosh, Cordelia, you were practically naked.” Cordelia heard a choked breath from Wesley and turned her glare on him. “You got something to say, Head Boy?”

Wesley shook his head, and turned towards the office. “Um. Need to file this…um….Haklar demon….file it, yes indeed.” And he disappeared into his office, sliding the door quickly shut behind him. Cordelia watched him, then turned her glare back to Angel.

“You had no right. None. Do you even get that?”

“I get it. But Cordy, c’mon. I mean, the thing…” he gestured with his hands in a classic ‘boobs’ gesture. “and, you know…the thing…” and he waved his hands across his crotch frantically. “You’re….it’s……”

“Oh god. Just shut up.” Cordelia threw her hands up. “Just please please please shut up. Because I can’t take any more of your strange Vampire logic. I got screwed on this deal, Angel, but let me tell you…..the next time I have a commercial….”

“There sure as hell won’t be a next time.” Angel listened dispassionately as the words hung in the air between them. Somehow, the switch between his brain and his mouth had been turned off. Either that, or he was morphing into Cordy.

If he suddenly grew 34C breasts and developed a need to head to the mall he’d know it was the latter. Cordy stared at him as if he had suddenly grown a second head.

“There won’t be a next time. You’re not doing that again.”

The front door opened just then and Gunn breezed in, blissfully unaware of the tense current of the room.

“Guys. I got a bar-b-que hankerin’ for some drippy meat slapped on a bun. Who’s in?”

The office door slid open an inch and Wesley’s voice called out weakly, “Gunn. Want to come in here and help…”

“No, he fucking does not.” Cordelia’s voice shrilled out over the large lobby. “Wesley, get out here.” There was a soft groan before the doors opened and Wesley strolled out, trying to go for casual and somehow looking frightened.

She looked from him to Gunn.

“Tall, dark, and stupid seems to think he can chart my career path for me. Either of you have the same delusion?”

Gunn looked back and forth between Cordy, Wes, and Angel, beginning to wish he’d just gone on to get dinner on his own. Wesley looked at Angel, sighing as he turned to face Cordelia.

“Cordelia.” His voice was gentle. “There’s a general feeling….among those who truly care for you and wish only the best of artistic endeavors….”

“Spit it out, Wesley. There’s another century turn in 96 years.”

“Um. Yes. Well.” He glanced at Angel, who stood by with a stubborn expression creeping over his face. “I would ask that you…think of the agency.” Cordelia blinked. “Yes. I would want you to only take those…projects….that would reflect well upon the agency. Projects that would require ample…coverage….” He trailed off at her expression.

“Who died and made you boss?”

“I CAN’T TAKE THIS ANYMORE!!!! I can’t take this life….shit. Shit. Shitty shit.” She closed her eyes, taking a deep breath. “Are you telling me…” her voice was the unnatural calm that Wesley imagined serial killers used when addressing their victims.

“Are you even trying to tell me that me being in a suntan lotion commercial would make the DEMON DETECTIVE AGENCY LOOK A LITTLE BAD? Because, gotta tell ya…”

“Cordelia.” Angel’s voice was implacable. She turned to him in mid-sentence, glaring. “I don’t want you doing that kind of thing ever again. I mean, c’mon. Were you even listening to that guy?” his voice became a whine. “ohhh….it’s all about the boobs….I have to wanna sleep with her….turn around, let’s see the goods…” his voice became normal. “You’re way better than that, Cordy. You deserve better. Much better.”

Cordy looked at him without expression. “You don’t get it. It’s a commercial. National. It could have been….” She broke off.

“Nope, you don’t get it and you don’t care. As long as I’m here, flopping around on the floor like a fish out of water while mind-numbing visions tear my brain apart, you’re all fine. But let me try to have a life that doesn’t include daily encounters with beings who have scales and bleed green and you’re suddenly all about what’s best for the agency. Fuck that, Angel. And fuck you.”

A small muscle twitched at Angel’s clenched jaw. “Watch it, Cordy. I did you a favor…”

“Yeah, thanks. I love the favors that involve ruining my life. Thanks, Angel. My birthday is next month…can I book you to ruin that now?”

Gunn had strolled over to stand beside Wesley and they watched the bickering couple fascinated, much like they would stare at a car wreck as they drove by. Gunn reached into his pocket and pulled out a package of Twizzlers, handing one to Wesley before munching down on one himself.

Angel stepped closer to her, towering over her slight frame. “You’re not demeaning yourself like that again, Cordelia. You’re better…hell, way better than that.”

“DON’T.” Angel’s voice was low and snarled out between clenched teeth. “Don’t say it. Don’t say it again, Cordy. I do not want to hear the words.”

Cordy looked at him a moment and slowly raised her arms, flipping him off with both hands. Angel felt the blood in his body boil with a warmth he hadn’t felt in..well, ever. He was almost sure steam was pouring out his ears as the sound of sniggering caught his attention.

He turned to Wesley and Gunn, who each looked quickly away, intent on other points in the room while they munched their Twizzlers thoughtfully.

Cordelia turned soundlessly and stalked over to scoop up her bag, tossing the strap over her shoulder before looking at Angel and throwing a look he had seen before and nicknamed the Chase Gamma Death Ray Glare. She clicked on high heels out the front door and slammed it behind her, leaving the three men standing behind.

Silence reigned for a moment before Gunn spoke. “So…..who’s up for bar-be-que?” Angel stared at the front door, unresponsive, before turning to stalk up the stairs to his apartment without another word.

Wesley and Gunn stood still, leaning against the counter and silent for a full two minutes, munching their Twizzlers. Finally, Gunn spoke. “Got a twenty that says Cordy wins.”

Wesley chewed and thought a moment. “Thirty back at you says that before this is done, she dismembers the family jewels.”

“Not touching that one. That’s a done deal.” Gunn chuckled. “C’mon, English. Chow time.” They headed for the door and out, their voices trailing off.

“Ya know, Barbie in a bikini…..shame we missed that….”