Title: In the Dark 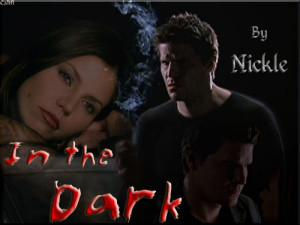 Author: Nickle
Posted:
Rating: R/N-17
Email
Category: Smutty angst, or angsty smut.
Content: C/A
Summary: Set during Angel’s beige period. Kind of AU take up to Epiphany.
Spoilers:
Disclaimer: The characters in the Angelverse were created by Joss Whedon & David Greenwalt. No infringement is intended, no profit is made.
Distribution: just ask
Notes: my first ever on the planet earth C/A story. Be gentle with me.
Thanks/Dedication:
Feedback: is yummy and delicious.

Fuck. Fuckity fuck. Cordelia sighed, blowing hair out of her face as she looked at the crumpled up paper in her hand once more. She tried to make out Wesley’s handwriting by the dim light of the desk lamp.

“Beterhon…no Peterson’s book…..” Jeeze. She knew if a handwriting expert got a look at this chickenscratch, Wesley’d be pegged for a serial killer. She held up the penlight and moved its beam slowly over the dusty leatherbound spines lined up neatly along the wall.

Wesley had been uneasy about Cordelia retrieving the book from the Hyperion, but he was still weak and wheelchair bound, and Gunn didn’t know the books as well as Cordy did. She figured it’d be a piece of cake to blow in, grab the book and blow out, all without ever seeing His Assholiness.

Cordy sighed and pressed her forehead to the cool leather of the books, closing her eyes. God, how had this happened? How had they all come so low? She hated feeling like this, all helpless and unsure. Angel investigations was up and running, but it wasn’t the same.

There wasn’t enough tequila in the world to numb her mind to the truth; they had lost their fiercest Warrior.

They were fighting a battle they couldn’t hope to win. She sighed, and opened her eyes, spotting the book she was looking for. One of the few they hadn’t carted out when they left. She grabbed it and turned to walk out of the office and shrieked, seeing the hulking shadow leaning casually against the doorframe.

“Damn, Angel. Lurk much?” Cordy took in a deep breath, hoping the thunder of her heart wasn’t as loud as she thought it was.

“Looking for something…oh….I see you found it.” Angel’s voice was casual; he may have been asking about the weather. He could see her perfectly in the soft glow of the lamp. Her eyes were wide and determined, but he could see the shadow of fear in the depths.

He wallowed in that fear; it kept her at bay. He breathed in once, shallowly, taking in her antagonism….her fear…..her anger……and the faint musk of arousal.

Cordy held the book protectively to her chest. “Yeah, I did.” She took one step towards the door and stopped; he didn’t move. “Wesley needed this book for a case.”

Cordy clutched the book tighter. “No. It was ours. There never was a “yours.” Wes built up this collection. It’s ours.” He remained still, his eyes flashing a brief molten gold. She looked up at him. “Move.”

He straightened up, seeming to gain bulk as he did. Her eyes grew even wider and she wanted to step back. Stupid vampire. He held still, looking down at her, then stepped aside enough for her to squeeze by, brushing against him as she pushed past.

She felt a shimmer of heat slide through her body as it touched his. She hurried to the front door, pausing to turn to face him.

“Hey, did what you suggested. Looked up vampire. I think the exact phrase was ‘predatory bloodsucking evil demon.’ Wow, they got that right. Except for the part where they left out ‘worthless’ ‘cowardly’ and ‘quitter’…..” she ended in a yelp as she was grabbed suddenly and pushed roughly against the wall by the door. She caught her breath, looking up at the vampire in question, towering over her, holding her body prisoner to his.

The book in her hand dropped to the floor with a solid thud and she pushed against his chest. He lowered his face, intent and dark, to hers.

“You never know when to shut the fuck up, do you, Cordy?” She wriggled, trying to get her knee bent so she could teach Mr. Happy a little lesson about pain. Angel maneuvered his leg between hers, pressing his leg up so she had to rise onto her toes. His hands grabbed at her wrists and he slammed them back against the wall on either side of her head.

“I only let my friends call me Cordy, Dorkula, get off me.” Cordy tried to keep her voice even, feeling his body pressed to hers from her chest down. She danced slightly on her toes, trying to keep from riding his thigh as it pressed between her legs.

“Mmmmm…and we’re not friends?” Angel breathed into her ear.

Cordy shivered at the dark intent in his voice. “GET OFF!”

He held perfectly still for a moment; all her jumbled emotions feeding him almost as well as a fresh kill. He pressed his forehead to the wall beside her head, and whispered into her ear, all menace and silky heat, “Get your book. Get out. Don’t come back.” He straightened and looked down into her eyes, wide and cloudy with fear, and with want.

His hands let go of her wrists and he stepped back, giving her an expectant stare. Cordy stared back, the want in her eyes slowly replaced with hate. She kneeled and scooped up the book and turned to the door, pulling at the handle. She opened the door and paused as he spoke.

“And Cordy…” She held still, her back to him, the door open. “Don’t come back. I find you here again, you come here for anything else….” She felt her back go rigid.

“I catch you here, for any reason……I’m going to give you just the fucking you’re wanting.” Cordy held, gripped in shock, then ran out the front door, not caring that it wasn’t the most dignified exit she ever made.

Angel remained there a good 10 minutes, letting her scent fill him as he thought of the inevitable that would happen, and let his body tighten at the thought.