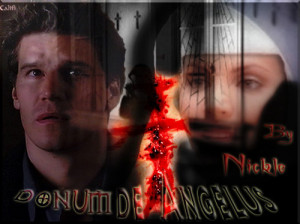 Author: donum do angelus
Posted:
Rating: R
Email
Category: adventure and angst, with a touch of humor. c’mon, it’s me.
Content: C/A
Summary: The FG goes undercover at Angelus’ favorite playground
Spoilers: AU, oh, let’s say S2.
Disclaimer: The characters in the Angelverse were created by Joss Whedon & David Greenwalt. No infringement is intended, no profit is made.
Distribution:
Notes: No Darla, no baby, just A/C goodness. .
Thanks/Dedication:
Feedback: would be delightful.

Chapter 1The air was thick and still, and faint scents of hyacinth and jasmine wafted through the air along the open corridor.

Heat seemed to shimmer off the adobe walls even late in the night, as if the old walls had stored the heat up to dole out in doses in the dark. A small breeze fluttered long trails of fern against the walls, brushing against dark adobe clay…clear and clean….until one saw the bloody handprint that smeared at one corner, just above the half-wall.

The handprint seemed to crawl down the wall, and trails of blood slid down from it in small rivers to flow into the large pool of blood upon the sidewalk. Face down, in the middle of the pool, lay a still body.

One hand lay open and empty, reaching out in a last cry for mercy….in the other hand was clasped a large wooden crucifix. A bloody wimple lay crumpled nearby, and a long strand of rosary beads lay atop the wimple, matted with blood.

*
Cordelia held her head, trying to keep it from pounding right off her shoulders. Angel crouched beside her, holding her against him as she calmed down.

“Easy, easy, Cordy. I’ve got you.” Angel’s voice was low. “Breathe, Cordy….you’re ok now.” Cordy leaned into his strength and held her hands over her face, trying to keep calm. The timbre of Angel’s voice was a balm to her scattered senses.

“Yeah. It’s an old building..” Cordelia closed her eyes, trying to remember. “A mission, maybe? Um….The Order of Our Lady Of Grace”

Angel was still. “A convent?”

“Not a necklace. Rosary Beads.”

“Yeah. They’re laying on the hat.” Tears began to fall down Cordy’s cheeks. “Oh, she was so scared, Angel. She prayed…..” Cordelia closed her eyes again. “…and she prayed, and she begged. It….it laughed at her. It got off on the prayers.”

Angel held her close to him, rocking her gently as he thought. This one could be really ugly. He needed to take care of Cordy and then get Gunn and Wes….

“Angel…” her voice was a whisper. He looked down at her. Her face lifted so that her gaze, reddened with tears, met his. “It was on purpose. It chose a nun on purpose. It…” she shuddered a bit and Angel gripped her tighter.

“It…grows stronger….gets….uglier…with the killings……it needs innocence…and…” her brow wrinkled. “Piety. It needs Piety.” Angel thought a moment and nodded. He rose slowly, bringing Cordy with him as he stood.

He looked down at Cordy, his jaw clenching as he saw the traces of fright still in her eyes. “Yeah, well, evil kinda punches its own clock, Cordy. Besides…” He smiled, trying to ease her shock, “I work best in the dark.”

Cordelia nodded, biting her lip. Sad fact was, this happened all too often at night. Angel was right, evil seemed to like to slither in the dark, unnoticed until it enveloped you in its embrace, too late to escape.

Too late for the nun, at least, lying in a pool of her own blood.

Angel walked to the desk and punched in Wesley’s number, glancing at Cordelia as she slumped back, her eyes closed. “OK, yeah. No, no need for that. Just call Gunn and meet me here in a few.”

He looked at Cordy again. “No, she’s ok. I think this was a rough one.”

She hated that the most; feeling helpless. She looked up as Angel set the phone down. Her voice was quiet and a little scratchy, as if she had been ill.

“Yeah, ten minutes. Listen, we can deal with this..”

“OK, then, go home and rest.” Angel walked to the cabinet against the wall wondering if this was the time he’d get lucky and she’d actually do what he said. Not that he had much hope, but today could be the day….

“No. I’m going with you. This was….this was a young girl, Angel. These are women. I think a woman needs to be there….” She broke off. Angel sighed, knowing she was right.

Cordelia grinned a tired lift of her lips. “You mean, stay back 10 feet at all times and keep my eyes lowered and don’t speak unless spoken to?”

“Hey, could you do that? Because that sounds…” He broke off as Cordelia whacked him on the head as she walked over to her desk to pick up her bag. He smiled back a little, and Cordelia seemed to draw in a breath of strength as he looked at her.

“I can do this, Angel. Not fragile here.”

“Nope. Not at all.” He stood there, watching her, and felt his world tilt ever so slightly. No, nothing fragile there, but a human heart. And he, of all creatures, knew just how fragile it really was.

Twenty minutes later, they were zipping down 105 towards El Segundo, each quiet and lost in their thoughts.

Wes and Gunn seemed to sense the unease that gripped Cordelia and had left her alone. Looking out at the passing inky night, she was grateful for their consideration, but felt their comfort lay around her like a warm coat. The top of the car was down, and a warm thick breeze lifted her hair gently off her neck.

Angel glanced over at her as he drove, worried that this was too much for Cordy to deal with. He had listened to her carefully, and her vision was best left out of reality.

Having to face it in all its bloody actuality was going to be hard on her. He casually took her hand in his as he drove, holding it tightly. He smiled slightly as he felt her fingers curl with his, gripping his hand.

The Mission was dark and silent. Cordelia stood by the car and looked at it, unease prickling at her spine. Angel walked forward and turned to look at her.

“You want to stay here?”

“Um. No. No, I’m coming.” And she walked alongside Wesley, towards the Spanish-style building.

They entered through an opened iron gate and looked around. The night was thicker and darker than usual because of the new moon. The courtyard was shrouded in the deepest of night, and the only way they could see the body of the nun lying on the sidewalk was the low light coming off the sconces along the walkway.

As they watched, a nun wandered through the courtyard and stopped, stock-still, as she spied the crumpled body. A muffled shriek sounded as her hand lifted to cover her mouth and she turned to run, screaming, “Help! Mercy on us all….Help!”

Evil had come to the Sisters of Our Lady of Grace; an Angel had arrived to deliver them.