Title: Boldly Going Where Cordelia Chase has Never Gone Before… 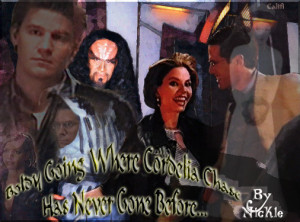 Author: Nickle
Posted: 06/04
Rating: PG-13
Email
Category: Humour, AU
Content: C/A
Summary: What happens in Vegas doesn’t necessarily stay in Vegas
Spoilers:
Disclaimer: The characters in the Angelverse were created by Joss Whedon & David Greenwalt. No infringement is intended, no profit is made.
Distribution:
Notes: AU from the beginning of Belonging on. Based on a challenge by CAMartin.
Thanks/Dedication:
Feedback: would be delightful.

“Oh……..God……ummmmm……” Someone beyond cruel had snuck in and poured sand into Cordelia’s eyes while she slept.

And apparently had smacked her head repeatedly with a blunt object, because she was waking up with the most raging headache known to mankind. Ever. And her eyes. Jeeze. She couldn’t even open them because they felt gritty and scratchy.

She lay in the bed, still, taking slow, steady breaths while she tried to get her bearings.

Uh….she thought a moment. This was not her bed. She was…..oh god. She was in Vegas. She slowly raised her arm and dropped it over her eyes. She was on a case. For….ohgod…what was his name……

ANGEL. That’s right. Angel, the guy she worked with.. That guy. She had come on a case to Vegas and was supposed to be going home today.

Except that she couldn’t move. Because she was tragically overcome by a massive gut wrenching hangover.

Her head hurt. Her body hurt. Her hair hurt. She licked her lips, trying to remember. The case had been solved, drinks had been poured, blackjack had been played…..she crinkled her brow. And there was something…..what was it? Something…maybe it was….

“Oh, please, kill me now.” Cordelia winced as she grabbed at the phone by the bed to keep it from ringing again. She carefully held the receiver to her ear.

“Um…hello. Hello? Jeeze…I hate it when wrong numbers….oh.” She turned the receiver around and licked her lips again. “Hello?”

“Cordelia?” Angel’s voice seemed to boom through the phoneline. Cordy groaned and held the phone away slightly. “Cordelia? Why are you still there? It’s past noon. I called your cell and it was off…I thought you’d be on the road by now.”

He paused, thinking. “Is everything all right? Because check-out time was…”

“Are you drunk?” There was anger in Angel’s voice.

“No. Jeeze. I am not drunk. Thanks for your support.” Cordelia pushed her hair behind her ears.. “I am not at the present drunk at all.” There was a silence.

“OK, dad. Busted. We got a little….well…..we kinda had a little celebration last night. C’mon, Angel…it’s freakin’ VEGAS. We kinda went out and maybe had a little…”

Angel snorted. “How many glasses of what did you have?”

“One glass, I swear…amaretto sour.”

Angel thought a moment. “How many times was the one glass filled?”

Cordelia giggled without thinking. “Oh, god, lost track after…..” she paused. “That really didn’t help me, did it?”

Angel was quiet. When he did speak, his tone was measured. “Where did you celebrate?”

“Oh, we went to the Hilton and did the Star Trek Experience….and ya know…one thing…and another….” She thought a moment. “It was happy hour, and these waitresses, they just kept bringing ‘em. Weird. And I think we saw a movie.”

“A movie.” Angel was beginning to sound amused.

“Yeah, at the Star Trek Experience. We were on a ride….The Klingon Encounter…and somehow, we saw a movie….and it was in a funky little room, and there was a man, and he was a Klingon, and there was organ music, and it was so sweet because the man and the woman were getting married…”

“The Klingons were getting married?” Angel was amused. She was giving him ammunition for the next century.

“Yeah….” She thought a moment. “Wait. The Klingon guy said he was a minister and the man and the woman thought it was funny….” Her voice trailed off as pictures flashed in her mind. “Um….and they…..they got married…..kinda…..” her mind went numb as her body went rigid.

She could barely breathe as she slowly brought her left hand up to her view. On the third finger was a small plastic ring with the Starfleet insignia on it. It was blinking red then green.

“Cordy?” Angel’s voice came over the line as she dropped the phone. She looked over at the nightstand next to the bed and slowly reached for the piece of paper propped up against the lamp.

She stared down at the elegantly printed letters that curved across the top of the page.

Oh shit. And the woman was…..she squinted, suddenly feeling her head pounding even harder. Her. She was the woman. She had gotten married. By a Klingon. To….

Her heart skipped a beat as she slowly turned her head, noticing for the first time the low, rhythmic snoring coming from beside her body on the bed. A long blanket covered lump seemed to rise and fall slightly with each snore.

Cordelia sat up, ignoring Angel’s voice as he began to call her impatiently on the phone. One hand reached over, and slowly pulled the covers down gently to reveal the slack-jawed face of her sleeping husband….