Title: What the Dickens? 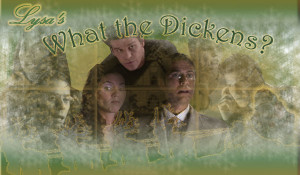 Author: Lysa
Posted: 12/04
Rating: PG
Email
Category: Holiday Insanity…Pure Spirit-of-Christmas Silliness
Content: Content: No Pairing, just Angel, Cordy & Wes
Summary: A client shows up at the Hyperion on the day after Christmas begging the Angel Investigations crew to take his case.
Spoilers: Late Season 1 / Early Season 2
Disclaimer: The characters in the Angelverse were created by Joss Whedon & David Greenwalt. The song used in this fic is by Dr. Elmo. No infringement is intended, no profit is made.
Distribution: here…please let me know.
Notes/Reading Tips: ***1) I had a crazy idea at 3am one morning & this is the result. It wouldn’t go away until I wrote it.***2) The main body of the story is told with the same rhyming cadence as “The Night Before Christmas” and has nothing whatsoever to do with the story by Major Henry Livingston, Jr. Be warned: there’s rhyming ahead (sorta).***3) The italicized words in green are the lyrics from the song and represents… Their Client’s Story.
Thanks/Dedication: Thanks to Lissette for the gorgeous ficpic!
Feedback: Absolutely! Any way, shape or form.

‘Twas the day after Christmas, when through the front door
Came a man dressed in black, tracking mud on the floor.
Here for their help, he begged to be heard;
Angel nodded his head and said not a word.

Wes encouraged the stranger to tell them all,
To include every detail, no matter how small.
While Cordy took notes and without further delay,
Asked how the new client intended to pay.

Into his pocket, he reached with a flash
To pull out a wallet and its large wad of cash.
I’m Charlie, he said, and I’ve come a long way;
There’s a killer out there I want you to slay.

What monstrous demon was this, Wes had to ask;
Angel considered weaponry for the gory task.
Evidence was clear, Charlie explained with a shout;
As to the culprit, there was never a doubt:

Grandma got run over by a reindeer,
walking home from our house Christmas Eve.
You can say there’s no such thing as Santa,
but as for me and grandpa we believe.

Not a snigger was heard as they gaped in reaction,
Then recovered quite quickly, taking immediate action.
As Angel easily hauled him to his feet,
Charlie begged not to be tossed out on the street.

Explaining he’d pay them for their time,
He told them the details of the crime.
Counting their money, Cordelia gave him a smile,
Encouraging Charlie to stay a while.

Would they take the case, he awaited their answer
About tracking down Santa, Blitzen, Donner and Prancer.
The details he gave them left no room for debate,
But for his dear old grandma, it was simply too late.

She’d been drinking too much eggnog,
and we begged her not to go.
But she forgot her medication, and she
staggered out the door into the snow.
When we found her Christmas morning,
at the scene of the attack,
she had hoof-prints on her forehead,
and incriminating Claus marks on her back.

Wes asked the others, with a reasoned veneer
To consider things might not be what they appear.
The police came and went, Charlie said, with a frown;
He’d gotten his hopes up and they’d let him down.

No one at headquarters believed his theory;
Santa was supposed to be old, fat and cheery.
Not murdering helpless old women he meets;
Or hit and run victims he sees on the streets.

Grandma got run over by a reindeer,
walking home from our house Christmas Eve.
You can say there’s no such thing as Santa,
but as for me and grandpa we believe.

Away to his bookshelves, Wesley gave thoughtful pause,
About identifying a demon disguised as Santa Claus.
With a roll of her eyes Cordy balked at his decision,
If this was real, she’d have been given a vision.

Angel leaned into the doorframe in a cross-armed stance,
Observing their visitor with a curious glance.
Giving Wes time to find clues demonic, mystic or mundane,
Or to simply conclude that the man was insane.

Now we’re all so proud of grandpa,
He’s been taking this so well.
See him in there watching football,
drinking beer and
playing cards with Cousin Mel.

With an arch of a brow, an I-told-you-so,
Cordelia suggested they let Charlie go.
No, no, Wes insisted as he skimmed through the book,
Requesting more time to research, he continued to look.

The books came up empty, no hints or a clue,
But taking the case was still something to do.
Charlie’s grandma was dead, no matter the reason,
No matter what happened this Christmas season.

Seeing that Wes planned to let him stay,
Cordelia looked for something else to say,
While Charlie sat miserably, a tear in his eye,
His hand absently strayed to rest on her thigh.

Patting his hand, Cordelia gave it a nudge,
With Angel glowering openly when he didn’t budge;
A huge sigh sounded as Charlie finally let go,
And spoke of his misery, depression and woe.

It’s not Christmas without Grandma,
All the family’s dressed in black
and we just can’t help but wonder:
Should we open up her gifts,
or send them back?

Cordelia called out, Send them back?!

Now the goose is on the table
and the pudding made of fig
and the blue and silver candles
that would just have matched
the hair in grandma’s wig.

Choked up by the sad story, Wes gave him a pen,
Asking how they might contact Charlie again.
They’d investigate more fully and get back a.s.a.p.,
To let him know if they made a new discovery.

Charlie jotted his name and phone number down,
To find Wes staring at it with a deepening frown.
Something wrong, he asked, as he tugged at his tie,
Nervously wondering as to the reason why.

Gaping with shock, Wes repeated the name:
Charles Dickens? He stared at the card, face aflame.
No coincidence, this, he finally concluded
Realizing he’d been completely deluded.

Yep, that’s me, Charlie said with a smile,
The glint in his eyes charming, designed to beguile.
Charlie told them he was impressed with Angel Investigations,
And he planned to inform the rest of his relations.

It was certain his uncle would come some time today
To tell them of his own Christmas troubles, and pay,
Apparently, he was haunted by a ghost,
Just one, Charlie said, two or three at the most.

Without having to ask him, Wes knew the old geezer
Would no doubt be the famed Mister Scrooge: Ebenezer.
Angel put his original plan into action once more
By hauling their visitor through the front door.

Before he said his farewells and drove out of sight,
Leaving Angel, Cordy and Wes to call it a night,
Charlie left them with one final thought
No matter the anguish or confusion he’d wrought.

I’ve warned all my
friends and neighbors
better watch out for yourselves,
they should never give a license
to a man who drives a sleigh
and plays with elves.