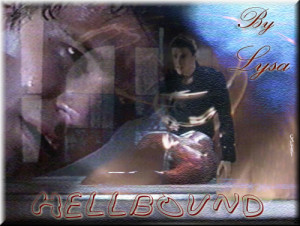 Author: Lysa
Posted:
Rating: R
Email
Category: Post-Episode Fic
Content: Angel POV
Summary: Angel returns from Acathla’s hell dimension.
Spoilers: BTVS Season 3 Beauty and the Beasts
Disclaimer: The characters in the Angelverse were created by Joss Whedon & David Greenwalt. No infringement is intended, no profit is made.
Distribution: Anywhere…please let me know.
Notes: My muse vanished, so Cali gave me a ‘homework’ assignment in hopes of luring it back. Basically, it was to explore Angel’s pov after his return from hell, including mixed feelings about Buffy, but without getting into any C/A stuff as this was just supposed to be a short exercise for my muse and not a smutty ficathon. I started off with a bang and then got distracted, so I think the ending is a little weak compared to the start. Any thoughts on that score are welcome.
Thanks/Dedication:
Feedback: Absolutely! Any way, shape or form.

Silence surrounded him. No longer did the din of demon howls or the sound of helpless souls crying out their torment fill his ears.

Other long-forgotten ones had replaced the acrid scent of smoke, sulfur and death. Jasmine and cedar mixed in the night breeze as it swept through the broken window pane, moonbeams filtering across the dusty floor to light his prison and the chains binding him to this hauntingly familiar place, home.

A hundred years of Acathla’s hell branded him: desolation, violence, and utter torment. To be souled in that world, feeling both anguish and empathy, yet forced to call upon primal instincts of man and demon was a torture in itself. No time for memories of sunshine hair, bloody valentines or that soft kiss before the final strike of a sword impaled his chest. Not even time for brooding, only survival.

Escape, the memory of it lost. One moment he was there, a hairsbreadth away from his own doom and the next surrounded by earth, trees and a starlit sky. Confusion reigned as he ran free, provoking scents guiding him closer toward musky human flesh, warm blood and something instantly identifiable: danger.

Face to face they stood. Recognition on both sides, hers for a long-lost lover she thought was dead, stunned by his sudden appearance; his purely instinctual, knowing not the face before him, but the prickling sensation alerting him that his natural enemy was near.

His growl rumbled low as a feral snarl spread his bloodstained lips.

The fight was brief for all its power; strength, speed, and determination driving them both. Weak from hunger and his recent trials, the scale tipped in her favor. For the first time in a hundred years of battles, he slipped deep into the darkness of unconsciousness.

Even before opening his eyes, he could sense the situation, hearing the light approach of footfalls across the floor. The feminine scent of his foe strengthened with her approach, her breathing steady, controlled, but her heart beating like a frightened doe with every forward step.

Animal blood, cold and uninviting, stirred a deep hunger for something warmer, tastier. Closer and closer still, she came to him and he pounced only to be held back by the heavy weight of the manacles around his wrists.

“Angel, it’s me, Buffy,” her words meant nothing at first, striking only the barest hint of a memory chord. “I brought you some blood.”

Night turned to day turned to night and finally she came again. More words, more blood, more memories sifting through the layers of confusion clouding his brain and keeping his instincts in control rather than his higher reasoning. Until the balance shifted and he came to understand his own identity as the past flooded back to him.

“Close your eyes,” she’d urged him with the taste of salty tears on her lips at a moment when he was too confused to do more than respond. All he knew was that Angelus had reigned soul-free and the clarity of feeling he’d experienced only moments before he prepared to take the Slayer’s life was once again obscurely wrapped up in a tangled web.

The chains rattled heavily as Angel lifted a hand to his chest, a phantom ache in place of a wound long-since healed. He’d forgotten what brought him to Acathla’s world, to that constant torment. He’d just existed, survived, but it was her hand than wielded the sword, hers that spilled his blood and sent him into the abyss.

A Slayer’s duty, a sacrifice mixed with love and sealed with a kiss, yet it smacked of both revenge and betrayal. Exaggeration perhaps, one where his mind turned a single decision, an instant of time into reasoned deception. Consumed and obsessed, Angelus’ bid to suck the world into darkness called for a sacrifice, one of blood.

Had he tormented her enough to make her overlook the fact that sending him to hell wasn’t necessary?

Not even a hundred years of Acathla’s hell could convince him of that deliberate scheme, but it was impossible to put aside that inkling of suspicion. The blame was his. Angel had no doubt that his own actions led him to the mouth of doom. He felt a deep, dark laugh well up inside him, void of all amusement, filled only with the censure of his own folly.

He had presumed to love, not just anyone, but the one girl in all the world chosen to slay his kind. Soul or not, it made no difference. It took a hundred years of hell to realize that whatever he had with Buffy Summers was little more than a fantasy, a dream he thought was reality. Nothing substantial was left behind the shattered fairytale they had created for themselves.

Soulless, he let her live out her worst nightmare, binding her to his own darkness with the memory of what they’d shared, but he was the one trapped, held to her by his own crazed obsession. Angel rose to his feet, the heavy chink of his chains reminding him that he was still her prisoner and it was time to put it all to an end.

Grasping the chains, he pulled against them until the stone cracked around the iron ring holding the thick metal links in place. Dust fell from the bracket, metal bending with a grinding screech until the chains finally dropped to the floor. He was free. Not just of the chains binding him or the world of pain and torment he had somehow escaped.

A hundred years separated him from his memories of Sunnydale. As long as he was here, he was still hellbound. It was time to move on. Where or to what, Angel didn’t know and for the moment it didn’t even matter. If he had a purpose in this undead life, it was not to be found in the Slayer’s shadow.

As Angel looked through the broken glass of the windowpane, staring up at the moon, the echoes of demon howls and the cries of the helpless returned to fill his head. This was not the world of Acathla, but demons prowled the night just the same.

There was no need to look for his own path; his personal destiny, it would simply find him.