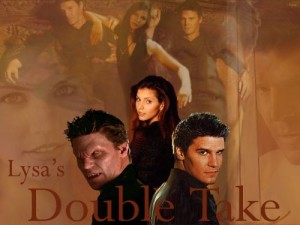 Author: Lysa
Posted:
Rating: N-18 ( for C/A/Aus smut)
Email
Category: AU Graphic Smut, Humor and Angst.
Content:
Summary: Angel finds a way to secure his soul when Buffy gives him an ultimatum, but it’s Cordelia who reaps the benefits.
Spoilers: A Reprise of my Double or Nothing Challenge.
Spoilers: BtVS S3- AU
Disclaimer: The characters in the Angelverse were created by Joss Whedon & David Greenwalt. No infringement is intended, no profit is made.
Distribution: Anywhere…please let me know.
Notes: Just for the heck of it, I felt like taking a shot at my little epic. For those of you who begged me for a threesome in Double or Nothing…here’s a complete reprise of the story in an alternate abridged version that references all of the criteria for the original challenge. There isn’t any slash per se, so no worries there and/or apologies if that’s what you wanted. Not my cuppa tea. This was enough of a mind shock.
Notes 2: This started out as pure parody and then the plot bunnies started to appear mixing up the genre with some unintended angst. So, I hope the switcheroo isn’t confusing. Not quite what I expected, but at least I’ve got this out of my system. Just think of this as fate choosing a slightly different path for our trio. *wink, wink*
Feedback: Would be nice!
Ficpic created by Lysa

Buffy Summers flipped her smooth perfectly coifed golden hair over her shoulder after staking her opponent. The misty cloud separated as she passed through it as if not daring to settle on her clothes.

Watching eagerly as Angel outmaneuvered the last vampire, she applauded as he snapped its neck dropping it to the ground where it burst into a haze of dust along the packed dirt of the graveyard.

“Oh, Angel,” sounded her deep sigh as Buffy darted across to his side. “You looked so hot making that move.”

With a knowing smirk, Angel simply agreed, “I know.”

Angel knew the feeling, but he was keen to help out where he could. “I’ll buy you dinner.”

Angel quipped, “How about a portable fan?”

As Buffy’s lower lip plumped and extended out into a pout, her expressive eyes grew large and tearful. “That won’t help— and don’t suggest anything else with batteries for my other problem or you’ll be a dust pile.”

Oops! Too late. Angel found himself face down in the dirt with Buffy straddling his hips. “We shouldn’t do this here, Buffy. Besides, it’s dangerous. I could lose my soul.”

“It’s past midnight. It’s a cemetery. We’ve just dusted tonight’s quota of vamps, so who’s gonna interrupt us?” Buffy grabbed the collar of Angel’s coat and pulled it down over his shoulders effectively restraining him and partially stripping him at the same time.

“Hi Buffy!” chirped Willow as she strolled up with Cordelia and Xander.

Cordelia eyed the pair on the ground, “What’s this? Practice?”

Xander coughed, “Sparring no doubt, a move or two to scare off any other demons in the area.”

Willow considered the idea as Buffy and Angel scrambled to their feet. They brushed the cemetery dirt from their clothes, straightening them hastily. “I dunno. It looks like Buffy was practicing something else to me. It’s not like they can do the real thing.”

“What are you three doing here?” Angel inquired completely ignoring that last comment. He was too pleased by the interruption to complain.

“We were at the Bronze,” Cordelia explained then added in a sarcastic tone, “but we felt like cutting through the dark and scary cemetery on the way home even if it was slightly out of our way just so we could find you two on patrol…and here you are.”

When Angel pointed out that patrol was over, Cordelia told him the real reason they were there. “My car broke down and this was the shortest route back to civilization.”

As they left the cemetery, Buffy and Angel trailed behind the other three. Muttering in frustration, the slayer couldn’t understand why fate could be so cruel as to let this trio show up when they did. “Unfair! I want you now, Angel.”

“I’m a no-bone,” Angel prompted. Lately, Buffy always seemed to have sex on the brain after patrol and it was getting more difficult to talk her out of endangering everyone just for a few hours of pleasure. “That’s how Cordelia thinks of me. Isn’t that right, Cor?”

Cordelia glanced back at the vampire who had somehow become her friend even after the wicked, lustful, fiendish things his soulless self vowed to accomplish the night Angelus tackled her in the cemetery. Upon Angel’s return from the prison of Acathla’s hell dimension, he had been so apologetic that Cordelia decided to forgive him. Besides, who could resist his deep brown puppy dog eyes even if he was a vampire?

She didn’t miss the fact that he knew she was listening. Calling out, “No bones about it.”

Xander snorted in response, doing a little eavesdropping of his own, but kept on moving down the street.

Darting a look at her boyfriend, Buffy wondered if Angel really thought that was true. It was not as if they had avoided doing things. They’d been careful. Lately, though, it was not so easy to hold back. “Do you love me, Angel?”

“Yes,” he told her after a thoughtful pause, sensing a trick question.

“Yes.” What was he supposed to say in front of her friends?

“Then you need to find a way to fix this little problem of yours,” she whispered a little too loudly. The others made no effort to hide their laughter as they continued on their way down the sidewalk.

“You know I’d do whatever you want, Buffy. Within reason. This is my soul we’re talking about, not a limp—,” Angel broke off as he rammed right into Cordelia who had stopped directly in front of him.

He grabbed the curvaceous brunette around the waist, automatically pulling her close to stop her from falling. Inadvertently, Angel pressed his hips into the rounded flesh of her silk-covered bottom.

“Something doesn’t feel very limp,” Cordelia commented just before Angel lurched away, automatically issuing an apology. It might have been the rough and tumble action that Buffy had initiated, but Angel instantly recognized the fact that his hands had itched to pull Cordelia even closer to slowly map out her curves.

Angel watched a slight flush rise high on Cordelia’s cheeks even as a mischievous light brightened her gorgeous hazel eyes. Their gazes held for a moment longer than necessary until Buffy’s hand tugged at his jacket.

“Angel, find a way to secure your soul, or—”

“Or what, Buffy,” huffed Cordelia on Angel’s behalf. “You’ll hold out on him? Kinda hard when you’re denying him what you want and he can’t give you. Hello! Impotent vampire here.”

“Am not.” Angel pointed out the obvious tent in his pants.

With a growl, he turned back to Cordelia irrationally incensed that she was going with her eunuch comments again. They’d had an entire argument about this one night after one of her classes. It had included a discussion on Greek myth and she’d come up with a ridiculous theory about Buffy latching onto a eunuch hero just so she could play the role of the virgin slayer.

Cordelia had rolled her eyes at her own theory, “Like it’s not too late for that.”

Angel often found a strange enjoyment in the snippy comments Buffy and Cordelia made to and about each other. Maybe that was wrong, but part of him loved it. No doubt it was his demon driving him to wicked enjoyment of a subject he should otherwise be trying to suppress. However, Cordelia making derisive remarks his ability to perform would not be tolerated, even if she meant them in jest, which he doubted.

Acting before the consequences even formed into thought, Angel reached out one large hand with superhuman speed, wrapped the fingers around Cordelia’s wrist and brought her hand into contact with the bulge in his pants. His fingers pushed her palm flat against him bringing her hand down the entire length of his considerable erection.

The move happened in the blink of an eye leaving Cordelia staring at Angel in shock at what he’d done. The vampire looked just as surprised, except that a hint of satisfaction showed in the deep well of his eyes. Cordelia roared in fury, “Are you deranged?”

“I am not.” Buffy thought the cheerleader was still talking to her. Defiantly crossing her arms over her chest, she issued her ultimatum, “Stupid gypsy curse. Angel finds a way to secure his soul or there will be no more graveyard walks, no more midnight kisses and all those other things he knows about that I’m not gonna mention cos you’re here.”

Angel was a little irritated that Buffy wasn’t even telling him this directly. She was still arguing with Cordelia. Maybe that was a good thing. It distracted Cor from plans which no doubt included her knee and his groin.

Cordelia slapped her hands down on her hips. “You think I can’t guess what you do when you’re alone together, Buffy? Maybe he’s a hottie and clearly not a eunuch, but— eew!— undead guy.”

Angel considered it progress that Cordelia verbally admitted he was not a eunuch. A hint of a smirk appeared at the corner of his mouth. Then he shoved both hands into his pants pockets to make the tenting less apparent as he considered the method by which Cordelia defended him against Buffy’s unrealistic ultimatum.

It was a good thing that she was his friend, because having that tongue turned against him would be devastating.

“What do you expect?” Cordelia demanded of Buffy. “That Angel will go home and find some misplaced ancient relic in his sock drawer?”