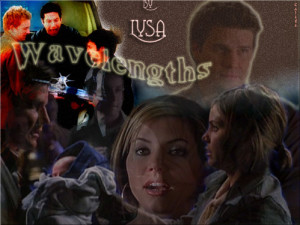 Author: Lysa
Posted: 06/15/04
Email
Rating: PG-13
Category: BtVS Crossover: Angst/Humor
Content: C/A
Summary: Having dealt with Connor’s potential kidnappers, Angel finds that his greatest threat actually comes from Sunnydale.
Spoilers: AtS Season 3, between ‘Dad’ and ‘Birthday’
Disclaimer: The characters in the Angelverse were created by Joss Whedon & David Greenwalt. No infringement is intended, no profit is made.
Distribution: Anywhere…please let me know.
Notes: This was supposed to be a standalone, but as I have a vacation on the horizon, I’m going to break it into chapters and post this in the serial section. Try not to faint at the fic rating or chapter length.
Thanks/Dedication:
Feedback: Absolutely! Please send some my way. FB keeps my muse happy.

The soft feminine sounds of Cordelia’s voice filtered up to Angel’s ears as he descended the stairs to the Hyperion lobby. A smile tugged at his lips knowing instantly who the recipient of her attention was.

Every day he woke up in amazement at the thought that he had a son. Miracle or mistake, none of that mattered. Connor belonged to him and his first priority was keeping his son safe.

Now that the immediate threat appeared to be over, Angel had sent the others out for the day. They deserved some time away from the mayhem that had preceded and followed Connor’s arrival into the world. For some reason Cordelia stayed behind.

He thought she would be just as eager as the others to escape the confines of the hotel and the clean-up work they still needed to complete.

Just the sight of her holding his son brought a lump to his throat. Only an hour before Darla showed up, perhaps minutes, Angel had admitted to himself that something was different about his feelings for Cordelia Chase. It took Fred’s crazy assumption that there was something more going on between him and Cordelia besides friendship to convince him that he wasn’t even ready to think about it.

Then Wes had asked a simple question about where he’d gotten the fake flowers brightly adorning the otherwise dreary basement. Angel realized he was drowning in denial even as the lie tripped from his lips. After that, he couldn’t get Cordelia out of his head. He’d sought her out as she worked at her desk, attempted to figure things out in his head, only he got caught staring.

When Cordelia mentioned the L-word, Angel thought he might jump out of his skin. He had barely considered the fact that his feelings for her might be something more and here she was freely talking about love. Except it wasn’t that kind of love, not the passionate kind, but the love of friendship and family. The kind they all shared.

Angel no more had time to register his utter relief as it mixed with disappointment than Darla had announced her presence. Her arrival killed any hope he thought he might have with Cordelia, the lie he’d spoken months earlier now coming back to haunt him in more ways than one.

He would never forget what Darla did to save their son, to bring him into the world by sacrificing her own existence, but seeing Connor in Cordelia’s arms made him think of the future and long for a possibility he felt certain could never exist.

There was no pretence in Cordelia, no artifice at all when it came to telling him how she felt or in the way she put aside all of her anger at him to help care for his son. There was no hint of it in those hazel eyes now gazing at him from across the room.

“Look who’s here, Connor,” she told the baby as she moved from her position on the couch to greet him knowing Angel would want to see his son first thing. “It’s Daddy. Yes, your very own big strong Daddy who forgot to ask Uncle Lorne if he could stay with you today,” Cordelia added in that same soft tone, her smile stretching a bit too far.

“Lorne isn’t around? That’s why you didn’t go to the carnival with the others,” Angel’s eyes widened at the realization that he had assumed a little too much about Lorne’s free time and Cordelia’s reasons for staying behind.

Still cradling Connor in her arms, Cordelia admitted, “I don’t mind. This is nice being here when it’s quiet for a change.”

“Thanks for looking after the baby this morning,” Angel offered genuinely. “You could have brought him back up to my room.”

Cordelia glanced toward the stairs before her gaze flickered back to him for a second before moving to look down at Connor’s sleepy face. Talking to the baby instead of directly to him, she whispered, “We didn’t mind a little alone time, did we sweetie pie?”

Stepping closer, Angel reached out to touch a hand to his son’s head with its soft peach-fuzz hair. His other hand automatically moved along Cordelia’s back, just to hold her there long enough to feel her presence.

He knew she wouldn’t be there for long. He could count the seconds before she piped up to say, “Well, I suppose you want to hold, Connor. Here ya go.”

Angel dropped his hand, letting her move over to the portable bassinette that they kept downstairs. She’d pulled it over by the couch. This being a Saturday, Cordelia had purposefully stayed away from her desk, especially in light of the fact that the others were all down at the boardwalk without her.

“Cordy, I’m sorry you missed going to the carnival today,” Angel felt the guilt churn in his gut. If anyone deserved a little life and fun, it should be her.

Gently settling the baby into his bassinette, Cordelia then turned back to the vampire who appeared to be headed into early brood mode. “Don’t even go there, big guy. It was my decision to stay when Lorne told me he had to go out. If I wanted to go with the guys that badly, I would have dragged your butt outta bed.”

She would’ve, too, Angel guessed, his mouth twisting into a smile as he pictured her doing just that. Taking a step closer, he queried, “Is that so?”

A pointed finger playfully poked into his chest as Cordelia squared off against him. “You bet I would and don’t think I’m not counting this as a day off you owe me.”

The tease in her smile drew Angel closer still until her head tilted back just to meet his gaze. When the bright dancing lights in those hazel orbs froze under the weight of his unintentional stare, he heard her heartbeat quicken as she held her breath in anticipation.

It wasn’t fear he sensed, but it was something more than surprise at the fact that he couldn’t seem to keep his eyes off her.

Angel figured it might have been his sudden inability to stop touching her as he noted almost absently that his hands were curved around her, splayed wide across her back and hip. He half expected her to jump out of his arms claiming he was breaching her personal bubble, but her only movement was the short catch of her breath as her body reasserted its demand for air.

Moving his hand from her hip, Angel let his fingers trail down the soft contours of her cheek to the stretchy plastic of the bandage still covering the healing wounds on her throat. Darla had nearly taken her life and the fact that he’d been too distracted to stop it from happening made him sick at the thought.

Dropping his hands away, he stepped back, a dark cloud covering his features as the memory filled his mind.

“What’s with the doom and gloom?” Cordelia asked as confusion settled in. Trying to figure out what was going on in Angel’s head was like weaving through a maze. The twists and turns were confusing, but for some reason the root of the problem always turned out blond.

Trying to bring back the smile she’d seen on his face as he descended the stairs, Cordelia commented, “Technically it’s Wes who’ll owe me the day off. Though I doubt he’ll consider that to be part of my Vision Girl job descript— oh, God! Angel,” she let out a yelp of pain just before her body tumbled toward the floor.

Whirling to face her in a rush of vampiric speed, Angel bent his body low catching Cordelia before she could hit the ground. Experience had his hands slipping into place, protecting her flailing body as it seized and shuddered with the force of her vision. The scent of her tears hit the air and Angel gathered her close, soothing her even as he tried to stamp out the fear that rose up inside him each and every time this happened.

She was sobbing in his arms.

“Tell me, Cordy,” he encouraged softly. He knew by the look in her eyes that it was awful.

Taken aback, Angel knew he wasn’t going anywhere. Not without knowing why. Not with out her and his son safe beside him. “Wh-What is it?”

“Now means now,” Cordelia tried to push at his chest to get him to move.

He did, sweeping her up into his arms and moving her over to the couch where he looked down at his still sleeping son. How the hell was he supposed to get Cordelia out of here? In this state she could barely walk. It usually took a few minutes for her to recover from a vision. There was only one way to carry them both.

“Hold on, Cordy,” he told her while shifting her over one shoulder. “Try not to move. I need to pick up Connor.”

Cordelia squirmed against his shoulder until she fell onto the couch. There was no time for escape. Not for her. Now it was too late for all of them. “They’re already here.”

Even before the warning left her lips, Angel was spinning around to face the trio of young men who stood just inside the Hyperion doors. Garbed in matching khaki pants and black shirts, they hardly looked imposing enough to merit Angel’s concern.

If it wasn’t for Cordelia’s vision, he would have put these three into the category of a mild irritant.

All human, two of them scrawny specimens, he noted with an assessing glance. Only one carried what appeared to be a weapon, a large metallic object that Angel would guess might have been inspired by one of Gunn’s electronic games.

“Cordy,” he spoke softly, but loud enough for the seer to hear him. “Take Connor and go.”

“Not so fast,” the tallest of the three intruders spoke up as Cordelia made an effort to do just that. “We’re here for the kid. According to our internet sources, that baby is worth a fortune. Give him up now and we won’t have to fry you with our… our…”

Picking up where the first guy left off, “Uh, our super laser electro-magic thingie.”

Angel actually laughed, suddenly figuring this might not be as dangerous as Cordelia seemed to believe. “Say that again?”

The shortest of the trio gave his partners in crime a dark look, “I told you we should have come up with a name for it first.”