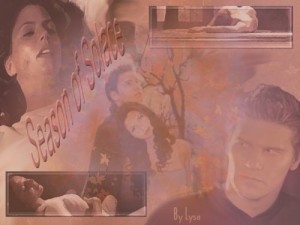 Author: Lysa
Posted: 16/06/05
Rating: R/N-17
Email
Category: C/A in BtVS
Content: C/A
Summary: Buffy teams Angel & Cordelia up to teach them both a lesson, but danger brings them much closer than the Slayer anticipated.
Spoilers: BtVS Season Three thru Lovers Walk.
Disclaimer: The characters in the Angelverse were created by Joss Whedon & David Greenwalt. No infringement is intended, no profit is made.
Distribution: Angel’s Archive, Go TeamC/A, Just Fic, FSB. Anywhere else…please let me know.
Notes: Based on a challenge posted at AO by Impress posted Oct 2003.
A/N 2: I’ve pushed back Spike’s arrival in Sunnydale, so for the purposes of this fic the rebar incident took place during a situation in which he was not involved.
Thanks/Dedication:
Feedback: Yes, any FB is awesome. I really appreciate hearing from you!

At the nexus of the demon realms, only a step beyond the worlds he has ravaged, a god awaits the final days of self-imposed exile.

No stars exist in this space between dimensions, yet there is light wrought by raging energies of the abysmal plane. Tiny flickers spark and dim in an instant. Explosive bursts create swirling event horizons in their wake as their colorful auroras brighten all but its blackest depths.

There in the shadows he waits. Embraced by the darkness. Alone by design. Solely focused on a goal nearly ten thousand years old, he maintains constant vigil on the barrier separating him from what he wants the most: a world ripe for reaping.

Chaos in fiery form consumes anything in its wake except for him. Eons of exposure to the elemental furies toughened his hide to a nearly invulnerable state. Scorching heat merely chases away the frigid cold, a soothing balm to one such as him.

Demons, warlocks and minor demigods pass unhindered portal to portal tapping into the energies of the abyss to create gateways to other worlds. He could stop them if he wished squelching them from existence without stirring. Most are far beneath his notice, but their goals are not dissimilar. Opportunity. Control. Power. His desires are great, his patience greater still. Yet, the waiting vexes him as the final days draw near.

Despite his overwhelming supremacy, these lesser beings have an advantage over their god. A single gate is all they need to access the world of their choosing. Not he who requires the combined power of the abyss to transport all that he is across the dimensional barrier separating him from his destination.

Tethered within this great expanse, he exerts his influence upon those who worship at his altars, countless beings praying for his notice little knowing the ultimate cost of his attention. Psychic links empower him providing sustenance.

From the mightiest to the lowliest he ushers them along a path of his choosing, granting power, wealth, or knowledge while bending their will to his bidding.

The worthy ones benefit the most. Loyalty pays dividends. They and their own followers will prepare the way for him to cross the dimensional divide eager to be in the presence of their god. To gain all that he has promised.

They may have what they will for it matters naught in the end. He will continue to rule long after their bodies decay and their bones turn to dust.

So too shall this cycle continue.

Since their earliest days when they lived in caves, when they learned the power of words and weapons, and challenged the demons that thought to make them prey, he has been watching for hundreds of centuries of their time. Observing them. Manipulating. Guiding a chosen few toward their inescapable destiny.

Even now, his loyal followers look to the coming days ahead, when the prophecy of his emergence will be fulfilled, awaiting signs that harbinger his freedom.

Sacrifices must be made. Rituals followed. Elements unleashed.

The gates of the abyss will open.

Upon that day, the six billion inhabitants of Earth will embrace the dominion of Amolon.