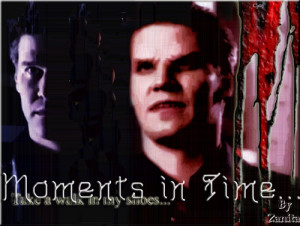 Author: Zanita
Posted:
Rating: R
Email
Category: Zanita
Content:
Summary: Just a look at a moment.
Spoilers: ATS
Disclaimer: The characters in the Angelverse were created by Joss Whedon & David Greenwalt. No infringement is intended, no profit is made.
Distribution:
Notes: I haven’t written anything in a long time. I have bits and pieces of some of my fics done but just can’t seem to fit them together. Anyway this is just my way of trying to get back into writing……anything. I may not write another one or I may have a whole slew of them in me, either way, this is kinda of just me trying to find my muse again.
Thanks/Dedication: Ok, this is a re-post of a drabble I did in February. The beautiful kyrieane spent the morning playing beta with me and the difference is phenomenal! Take a look!
Feedback: How about, if you do, make sure it’s brutally honest?

The wind swept streets echoed the eerie silence back to him as he walked boldly, yet soundlessly through it. The night’s shadows finding him, enveloping him, clinging to him like a lover. He embraced them in return, using unnatural abilities to be seen and yet passed over. His appearance was outwardly calm, yet lust pounded in his ears. It overwhelmed him until he thought of nothing else but the hunger. Hunt the prey, his demon said, feed on that of warmth and innocence. Drink your fill and rejoice in the death you bring.

He could hear the man’s heartbeat quicken at the sudden realization of a presence behind him. It thrilled him to smell the fear of the man, made his own senses heighten as the sensation swept through him. He moved swiftly, letting one heavy footfall resound and watched eagerly as his victim spun around quickly to confront his stalker.

The man saw mostly darkness, sinister and foreboding. Then as if melting out of the night, the figure moved into a splash of street light and then he saw death. In the chiseled cheekbones, in the strong jaw, in the dark eyes that looked into his soul and cared nothing for it’s life. ‘Not human’ some unknown place whispered inside, and watched as the truth of it was shown to him.

Slipping into game face within a moment, the freedom of letting loose his true being was a release in itself. Power surged as his brow tightened and his fangs slid into his mouth. With the grace and speed of an immortal, he had the man in his arms, plunging the razor sharp incisors into the pliant flesh beneath his mouth. He felt his victim’s arms encircle him and hands grasp the taught muscles of his back.

The liquid, thick and pungent, rushed into his mouth. Coating his tongue, sliding slickly down his throat. Ecstasy swirled through him flushing his skin and tightening his loins. Hips thrust against the man, pulling him closer. The demon had made demands, he would take everything this moment had to offer.

His throat worked slowly, methodically as each swallow increased his pleasure and filled him with the warmth he craved. Again and again he drew this man’s life into him until all he knew was the taste and feel of him. Only he existed. And the taking of that existence was branded upon him forever.

The breeze ruffled the demons’ hair and swayed his long black coat. The man made no sound. His face now relaxed and at peace, hands gently curled in the creatures clothing. To any passers by it would seem only as if this were old friends meeting anew or lovers on a rendezvous, the scene poignant and private.

Hardly more than a few heart beats went by, each one feeling the length of an hour. The blood slowed in his mouth, he felt the man’s arms slip from around his body to hang limp at his sides. With one last draught, he withdrew from the now empty vessel. Lifting his hand he closed the lids on the lifeless eyes. And touched his now warm lips to the cooling forehead.

Laying the corpse gently on the ground, he swiftly re-traced his steps, his human face emerging once more. Approaching the opening of the alley, he could smell the stench of the demon he mutilated only moments earlier. Moving closer to the gory mess he bends down and he stares at the bloody remains of the demon he had allowed to escape, giving him spare moments for his hunt. His soul makes a silent acknowledgment to his demon, accepting the necessary evil of his charade.

Raising his head he watches as his beautiful seer runs to him to assure herself with her own eyes of his safety.

“I hate it when you run off to fight alone.”

A weary, yet sad half smile touches his lips. “I know. But sometimes it can’t be helped.”

Standing up and pulling his Broadsword from what was left of the things’ torso, he could feel his soul scream with what he’d done. But his demon was quiet and satisfied, the hunger abated, the gnawing lust controlled. And to that end, what he did, couldn’t be helped as well.