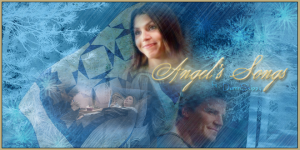 Author: DamnSkippy
Posted: Dec 30 2004
Email
Rating: Soft NC-17
Category: Schmangst – Schmoopy Angst
Content:
Summary: Angel tries to surprise Cordy with something she really wants for Christmas.
Spoilers: Who hasn’t seen this show? Okay, S3 through DoN if you’re picky
Disclaimer: The characters in the Angelverse were created by Joss Whedon & David Greenwalt. No infringement is intended, no profit is made.
Distribution:
Notes: This is set during Christmas in S3 some months after WiTW. Cordy is half demon, but there was no pregnant Darla, hence no Connor, and no Groo. Angel, being Angel, was still unable to tell Cordy how he felt after the ballet. Btw, my real time and the episodes’ air times don’t coincide. I don’t believe they’re supposed to. For example, Birthday was aired in February 2002, but I firmly believe Cordy’s birthday is May 22nd. So this is actually Christmas 2002 which some would say is S4, but phooey on them. A/N 2: I’m all note-y today. This is really two – count ‘em – Two fics in one. If you’re not in the mood for angst and just want the gooey center, do NOT read the Prologue and Epilogue. Those are angst minefields. But, if you want the full story, don’t skip the pain. I think it’s worth it. Oh, yeah – this is pretty long so get a cup of coffee or tea and make yourself comfy.
Thanks/Dedication:I am dedicating this to Daisy simply because the subject matter is right up her alley and she wants me – badly. (You realize that will be archived everywhere forever and ever.) Thanks goes to Lissette for her beta time and both she and Helen for their wonderful encouragement. I love you guys and will never let you go.
Feedback:

The plain cardboard box lay in the middle of the bed.

The colorless twilight of the world invaded the once bright hideaway that had been shared by two lovers not that long ago. But only one remained, and he sat unblinking, cold, and frightened. Afraid to move…terrified that if he disturbed the stillness with the fan of an eyelash or spoke or even sighed, the illusion created from hazy light and dusky shadows would disappear.

It was Christmas Eve. There – only a few feet away and hidden behind flimsy corrugated paper – was possibly the last and greatest gift he would ever receive, but Angel couldn’t make himself touch it.

He stared at the handwriting and the words on the label and once again convinced himself it wasn’t possible. It had to be a trick from some enemy old or new. There were so many now there would be no way to narrow them down even if he had the energy to care.

The sheer cream curtains covering the French doors lazily danced on the wings of a draft and broke the trance he’d been in for the hour since the delivery. He practically convinced himself his imagination was playing tricks when the wind brought with its cold fingers the scent he knew so well – the one that had left when she did. The one he would never be able to forget, not even after he was relieved of this wretched existence and was sent to a better hell not on this earth.

He almost laughed but it choked in his gut. He never thought he’d forget how to laugh after so many years of the sound of it echoing in every room and hallway of this huge hotel, but it didn’t take that long. All it took was her leaving and the laughter vanished like a wisp of smoke in the swirl of her wake. Simple really.

Unaided by conscious thought, his hand crossed the gap between wishes and reality and touched the seemingly solid cardboard. His dry fingertips scraped along the edges, mapping its width, length and height as if geometry would make it more substantial than his own senses were telling him.

The switchblade felt just as solid in his fingers as it always did giving Angel some hope that he hadn’t slipped into dementia. Pulling it from his soft gray pants pocket and pressing the button by instinct, the sound of the clasp releasing and the scraping of the sharp edge as it whooshed from its casing finally caused him to blink.

His eyes momentarily diverted from the brown box still gripped in one hand to the glint of steel in his other. He watched almost mesmerized as the tip dipped into the crease held together by thin but strong packing tape and began to slice. Cutting a meandering trail through the strapping material, his trembling hands released the bound flaps one painstaking edge at a time. The instant the last strip was severed the box popped open, the contents seemingly pushing outward from inside bursting to be free.

Angel carefully flipped the blade back into its sheath one-handed while the other began to gingerly reveal the contents. The rasp of the crisp and flimsy tissue paper sounded like the crunch of boots on hard-packed snow, the glide of a sleigh on an icy path, the wind of the first snow storm through tall pines… Instantly his hand stilled and his eyes felt hot with the sting of tears he had refused to shed as the memories exploded free from his mental vault.

It was their first real Christmas together. They didn’t bother with celebrating the year Doyle died. The only gift either of them wanted was their friend back and that wish had already been refused. The following year, he’d been vacationing in beige town, population one, so the stockings were pretty bare although the Christmas cheer was flowing freely.

But by Christmas of their third year together, things were finally settled into something resembling peace and harmony.