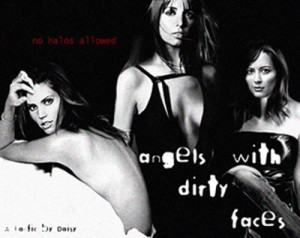 Author: Daisy
Posted Originally: 09/03
Email
Rating: NC17
Category: Angst
Content:
Summary: No matter how fast you run, your past will find you.
Spoilers: Post season 4. Possibly spoilers for season 5
Disclaimer: The characters in the Angelverse were created by Joss Whedon & David Greenwalt. No infringement is intended, no profit is made.
Distribution:You want it, you got it. But be a peach and let me know.
Notes: This is quite clearly not chapter nine of His Lady Lazarus. For those who reading HLL, I promise it’s being written. It’s just taking a while.
Thanks/Dedication: Go to Dawn (Pushydame) for telling me that this doesn’t suck as much as I fear it does. The lady rockeths muchly. Now, when are we getting more Exiles? *g* Thanks also to the glorious PushyDame for her invaluable help with everything AWDF and for the wonderful artwork that helped put a fire under my muse.
Feedback: Is better than a chocolate covered Hugh Jackman with a side serving of Amy Acker.

The air was stale and still, the occasional drift of dust rose up by the side of the road from a breeze that was over with before it even began. A landscape of nothing blinked by unnoticed while the ailing radio crackled out traffic news that was of no use to the three women that occupied the stiflingly hot Desoto, too busy in their own thoughts to take in the wide rolling vistas they sped past.

Arid land, bleak in its beauty, too bright for eyes that had grown accustomed to the night, sunlight bounced mockingly off the road making them squint until the dull thud of a shared headache bled into the edges of their brains. Surely it shouldn’t be so bright, surely the sun should be mourning the loss of what little innocence they’d had left? Surely there should be a storm, a tornado of pain and loss ravaging the land, not this quiet peaceful nothing.

The sun shined and the car sped on, bumping over potholes that made the suspension grunt with irritation. The traffic update ended to be replaced with an over enthusiastic DJ declaring the reward for being the tenth caller.

Money in the bank, car of your dreams, fantasy vacation a million miles away.

Forget all your troubles with a fruity drink.

“I wish you wouldn’t smoke in the car,” Fred muttered under her breath, her eyes fixed to the road ahead, knuckles bone white on the steering wheel.

“Yeah well I wish for I lotta things, so far I’ve got none of them,” Faith drawled as she carelessly flicked her ash out of the window.

“Those things are gonna kill you,” shaking her head with disapproval Fred fiddled with the air conditioning only to be rewarded with a stream of warm air for her effort. With a defeated sigh she wiped away the sheen of sweat from forehead with the back of her hand.

“Really? There I was thinking they’d help me live a long and happy life,” the Slayer rolled her eyes, taking a long satisfying drag of nicotine into her lungs.

“It’s disgusting and it’s stinking up the car.”

“The car already stinks,” Faith dismissed the subject with boredom even as she tossed the half smoked cigarette out of the window. Left with nothing to occupy her restless hands Faith took a turn at impotently pressing the buttons on the dashboard in search of the air conditioning. “The a/c doesn’t work,” she declared after a while without result.

“How come we got stuck with this pile of junk? With all that money Angel’s-“

“Faith!” the Texan hissed to silence her. Fred darted her eyes at the rear view mirror.

“She ain’t listenin’,” Faith looked over her shoulder, not surprised that the third in their party of brunettes still sat curled up in her seat, staring unseeingly at the blurring landscape.

“Cordelia’s fine, she just needs a few days away,” Fred said confidently, her fingers flexing on the steering wheel as though it were the only thing keeping her grounded.

“Oh yeah, a few days away should make everything just shiny and new,” Faith rolled her eyes.

“She’ll be fine,” Fred repeated like a mantra as she looked at the once confident and vivacious woman, now barely a shadow of the person she once was.

The cold water felt good against her face, that much Cordelia was sure of. It was real on her skin, when she touched it she knew it would be wet, that it would trickle through her fingers, that gravity would draw it south.

It was a certainty, something she could rely on.

The face that stared back at her from the cracked and dirty bathroom mirror no longer was.

Was this really her?

How could she know anymore, what if the person that stared back wasn’t who she thought it was?

Nobody would be able to tell.

She rubbed a damp paper towel over the back of her neck, the coarse material scratched against the sweat and grit borne of too many hours heading god knows where.

Somewhere. Anywhere as long as it was somewhere.

Cordelia absently fingered the ends of her hair, it was longer than she remembered and she wanted it gone, to cut away the thick mane of brown and grow it anew, fresh start, do-over. Maybe she could shed her skin too, leave behind a trail of paper thin deceits on the dirty floor and walk out of the graffiti covered rest room the woman she once was. Or was she? Had she ever been that woman, was that a lie too, were these her own thoughts and actions, when she traced her finger over the spider web crack in the mirror was it her, Cordelia, Cordy, that didn’t grimace as it sliced cleanly into her finger? Was it her blood that dripped like slow running honey onto the yellowing basin? Drip, drip, it was a hypnotic sight but why couldn’t she feel it? Why couldn’t she feel the sharp stinging pain that told her she was still alive, still breathing, away from the nothing and back where she belonged?

Death would be easy. Cut her wrists or swallow too many pills, at least then she’d be free of the nothing, make it slide down the drain in a stream of red, watch as it left its stain on the porcelain as it had on everything else.

So tempting to end it now in the small bathroom, under a bare light bulb, between the towel dispenser and the leaking pipes-

“Cordy, you all right in there?” Faith’s voice called through the door as if the other woman knew exactly what was going through her mind.

“I’ll be out in a minute,” Cordelia answered back evenly, “I just need a minute,” she told her reflection quietly as though she were asking herself for space to be alone. Her voice felt scratchy and raw from too many months without use, it still sounded the same though, just as her face was the same, her hands, her breasts, her legs. Everything familiar yet so very wrong, left with used skin and borrowed bones, weak muscles and tainted flesh.

Could a stranger tell just by looking what her hands had done? Might they realize the pain her fingers had danced through? Would they understand how she still felt the power crackling seductively beneath her skin, how at night dreams full of dark whispered promises made her ache with atrocities that another committed.

Would they see the tainted memories of a sweet baby boy she’d sung to sleep behind her guilty eyes?

“I bought you these,” Fred handed Cordelia a pair of dark sunglasses as she settled once again into the back seat.

“Thanks,” she forced the corners of her mouth to tug up into what she hoped was something that resembled a smile.

Cordelia felt the skin around her eyes crack from disuse.

“How are you feeling?”

“Good,” she lied because it was easier than the truth.

A spark of anger flared inside her momentarily at the hopeful smile Fred was giving her. It passed as soon as it had been ignited though, leaving nothing but the hollow space twisting in her gut. Cordelia wrapped her arms around her legs and rested her chin on her knees, eyes fixed to the few scattered specks of black paint that had apparently refused to be parted from the window glass.

“Let’s get this oh so merry show on the road,” Faith announced as she slid into the drivers seat, throwing the sodas she’d bought next to Cordelia. The dark haired Slayer gunned the ignition and pulled away from the gas station, a trail of dust spraying behind them in their wake.

Angel read the note in the dappled sunlight that blanketed his office, the urge to shuffle into the shadows itched at his skin as he memorized Fred’s scribbled words.

“Does it say where they’ve gone, if they’ll be returning?” Wesley asked from the opposite side of the room, no longer shoulder to shoulder as they once had been

“Can hardly blame her-“

“Spike.” There was enough Angelus in that one word warning to make the usually verbose blonde vampire swallow his contribution to the conversation. Patting his pockets until he’d found the crumpled pack, Spike stretched out lazily on the black leather sofa and lit a cigarette, cocking an eyebrow at the annoyed look Gunn sent his way.

“We going after them?” asked Gunn when the thick silence began to scratch at his nerves.

Angel felt three pairs of eyes staring expectantly at him, waiting for instruction, as if he knew what the hell it was he was doing.

“I have a meeting,” Angel grunted and stalked out of the office.