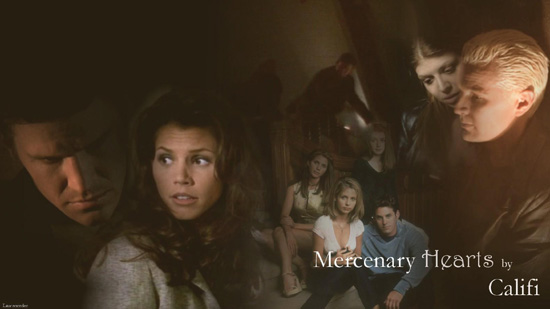 Title: Mercenary Hearts
Author: Califi
Posted: 25/06/05
Email
Rating: R
Category: Alternate Universe / Drama
Content: C/A.  No Angel or Spike involvement pre-S4
Summary: Mercenaries for hire, Angel and Spike’s latest ‘contract’ leads them to Sunnydale. They end up fighting the next Big Bad alongside the Scoobies.
Disclaimer: The characters in the Angelverse were created by Joss Whedon & David Greenwalt. No infringement is intended, no profit is made.
Distribution: Please ask first.
Notes: A/S first appearance in Sunnydale. Both cursed with souls, but never a Gypsy caveat.
Thanks: I would like to thanks Lysa once more for her support through this fic. Hopefully she’s mostly curtailed my tendency to ramble on like a crazy person, lol. I only hope I do the fic justice.
Challenge: Based on a challenge posted by Impress. Details at end of story.
Feedback: The yummy icing on top. 🙂

“There are too many,” Angel finally spoke, his voice a low rumble. “Let’s wait until they split up.” A statement, rather than a suggestion, Spike noticed sourly.

“Then it’ll take bloody forever to find ’em again.” He shifted impatiently on the crate he’d found to sit on. He’d never been one to avoid a fight, regardless of the odds, and he was getting antsy just waiting. He could think of better places to hang out than this particular area of New York.

He hated the smell of harbor water. It brought back too many bad memories of his not-so brief reign of terror in the murky Docklands of England.

The dark haired vampire beside him hadn’t so much as twitched a muscle since they’d ended up on the outside looking in, and that just pissed him off more. Oh, he could do the impression of a tree alright, but that meant being still. Which soon led to boredom… “Shoulda brought popcorn”, he muttered under his breath. At least eating would take the edge off.

“Sod it. I’m going in.” Spike dropped his half-smoked cigarette and rose lithely to his feet.

They’d been tracking the group of demons hiding out in the warehouse for several weeks, and had been more than irritated earlier to find out there were at least half a dozen more than the seven the paperwork had stated.

Although that put the kibosh on ending it tonight, being pissed had nothing to do with being outnumbered, and everything to do with the price agreed upon. Angel was more than tempted to stick to the original number and let the ones who’d hired them sort out the others themselves.

But his decision to wait it out until the group broke up a little and pick out their marks then, was just about to hit the crapper.

Angel cursed a blue streak, as the hand reaching out to stop the impetuous vampire wasn’t quick enough and grasped thin air.

“I’ll kill the scrawny bastard” Angel swore under his breath as he headed rapidly towards the doorway his partner had just kicked open. If he isn’t already dead, he thought as the sound of raised, guttural voices, roars and crashing grew to an ungodly level.

“Fuck it!” The curse tore from him.  Angel’s blood-coated hand slipped on the length of wood jammed between his ribs jolting it higher. Sweat popped onto his brow as he realized how close the buried shaft was to his heart.

Gritting his teeth, he eased it out an inch at a time, groaning aloud when it finally pulled free and his borrowed blood sluggishly filled the jagged hole. Dropping the wood to the ground next to him, he finally lifted his dark head and scanned the gloomy warehouse, dilated eyes briefly resting on every dead demon sprawled on the filthy floor.

Counting up six, a growl of annoyance rumbled his powerful chest, changing pitch as he attempted to get to his feet. Blood starting pissing out of his wound, and with a grunt, Angel slumped back onto the floor, his back propped against a wall. Only two of the dead were in the contract. Just great.

Resigning himself to the fact that he’d be going nowhere for at least several hours, he settled as comfortably as he could and tried not to think too much about the distinct lack of a bleached-blonde’s head amidst the carnage.

“So… Could you tell me if we need to help you file for assistance?” The woman smiled in what Cordelia guessed was the “I’m-your-friend-trust-me’ look. These people probably worked on constantly to get it just right.

“What do you mean by that?”

The smile quickly faded. Obviously it wasn’t working this time. “Ah…assistance. Public assistance. Do you have a job?”

Cordelia nodded instantly, an expression of pride on her face.

“Yup. Got a job. I work at the cafeteria at the University. You ever been there? I’m the beverage girl. See, I get there really early in the morning, 6:30 am, and I start these big huge urns of coffee. And I make the iced teas. And the lemonade, too. And I have my afternoons all to myself cause I get off around three. It’s great, to get off work and it’s still like practically the middle of the day!” She finished breathlessly and then sat back, folding her arms tight across her chest.

“So you don’t need to apply for public assistance.” This caused a dark frown to crease Cordelia’s normally smooth brow as she glared.

“I just told you. I’ve got a job.” Narrowed eyes stared back. After years in her job, she was pretty much used to antagonism. Then she blinked and finally broke contact, dropping her eyes to the open file on her lap.

“Let’s see… ‘Recently released from…Women’s penitentiary. Probation for a year…’ That’s what it says here, in your record.” Pointed out so calmly that Cordelia had to stifle the urge to yank the file from her and throw it across the room.

“Now, could you tell me about this attempt to steal the Christ Child out of the rectory of the University Lutheran—”

The young woman blinked rapidly at the vehement tone in the voice that interrupted her. “Sorry?”

Cordelia’s expression was tight with anger, defensiveness in every line of her body. “Who says I stole? I didn’t steal nothing … Anything.” She added reluctantly after a pause.

“That’s it for today’s rehearsal. Thank you, Cordelia, Tara. Very well done, now don’t forget, study, people!” Closing the book on his desk with a snap, Mister Barnes eyed his underclassmen with a stink eye before leaning down and grabbing the tattered old briefcase next to his chair. “I want this scene wrapped up by tomorrow afternoon. Get to it.” With a quick flick of his hand, he left the room without looking back.

Chairs scraped across the floor as students got to their feet and made a mass exodus to the open door.

“That was really good, I wish I could just…” she shrugged before continuing, “Forget everyone else was watching when I’m up there.” Tara took her time rising. Walking back to her desk, she slid her books and notes carefully into the hold all she’d pulled off the back of her chair.

“You were great. And like I’ve said before, just imagine everyone in their underwear. Works for me,” Cordelia’s grin turned into a grimace. “Then again, maybe not such a good idea where Mister Barnes is concerned. Can I say eww?” Tara laughed, pushing in her chair before walking over to join the brunette at her desk.

Reaching out quickly to grab a book that tried to slide off the top in protest, as things were stuffed into a large purse haphazardly, Tara held onto it until everything else disappeared, then handed it over. “What do you have planned tonight?” she asked as they made their way out of the now empty room at a more leisurely pace than the other students had.

Pulling a face, Cordelia shrugged with a sigh. “Dinner with mother and daddy,” her bottom lip pushed out a little. “They’re off to Sicily tonight. Business trip thrown in with a little sightseeing.” She shrugged again, outwardly unconcerned, but Tara picked up on the hidden pique.

“Didn’t they get back from Hawaii not long ago?” she asked, shifting her hold all more securely on her shoulder. Cordelia nodded glumly. “I’m sorry.” It hadn’t taken Tara long to become aware of the girl’s parents love of travelling- and their distinct lack of parenting skills.

In the months since they’d first met and become friends, they must have left the Country at least half a dozen times.  Cordelia blithely stated that it was ‘the norm’ and it could have been worse: better than having abusive parents.

Tara’s own father had been a coldly authoritarian figure. The latent abilities that had been passed on by her mother, a powerful Witch hadn’t helped. After her mother died, it became ten times worse. The stammer that became apparent whenever feeling threatened or anxious was just one result. Admittedly, after meeting the brunette and subsequently joining the same Drama Class, she found it had helped.

Cordelia shook off her mini funk, leaning over to nudge the blonde girl with a grin. “It’s not your fault they decided to ask me if I wanna go half way through a semester.” The grin faltered for a second. “Dammit, I’ve always wanted to go there,” she whined. Tara patted her arm consolingly, and then dug into her jean jacket pocket.

“Twinkie?” she proffered a slightly squished candy bar, and then grinned at first the look of horror, quickly followed by guilty greed as Cordelia took it, then Tara pulled out another bar and unwrapped it.

“Don’t think I won’t remember this when I’m as big as a hippo and have to buy two seats on the next plane I ever get to travel on,” she warned between bites. Both girls giggled as they sauntered down the rapidly emptying corridor of Sunnydale University.